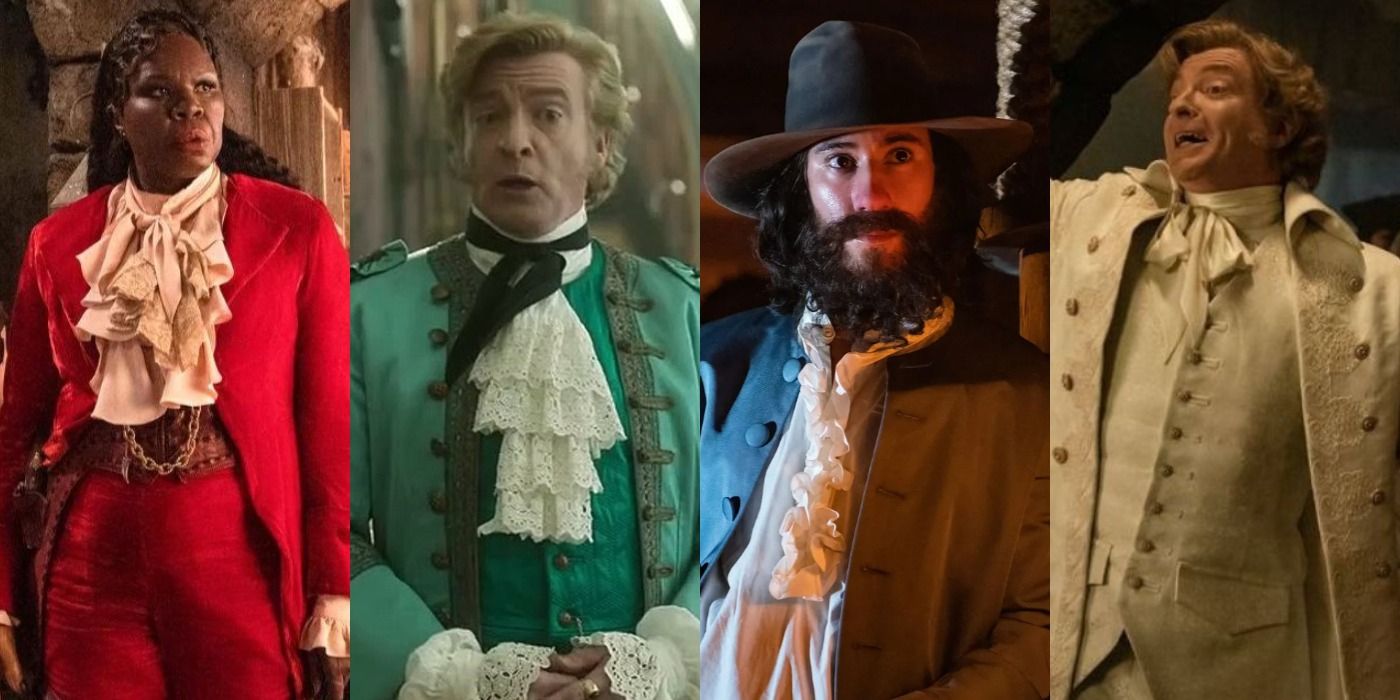 HBO’s Our Flag Means Death thrust viewers into the wacky world of Blackbeard and Stede Bonnet, two completely different pirates who find out they have more in common than they think. The period romcom has some surprisingly gorgeous outfits, which highlights the work that went into costume design for the series.

While a majority of the memorable ensembles from the show are predictable from Stede’s wardrobe, characters like Spanish Jackie and even Blackbeard himself have some striking outfits, too. As fans eagerly wait for details about a potential second season, it’s the perfect time to appreciate these fashionable and often colorful attires.

The first outfit fans see Captain Stede confidently wearing onboard the Revenge is a beautifully-made teal ensemble. The sight of his attire obviously annoys the restless crew who are not used to his compassionate management style just yet.

From the frilly sleeves to the properly tied scarf around his neck, every detail of the costume is obviously made for his character. It reflects his upper-class background as a wealthy landowner and lets audiences know that he hasn’t completely abandoned that part of him despite his decision to become a full-time pirate.

Stede and Blackbeard go on an exciting – at least for Stede – treasure hunt after the naive captain purchases an expensive fake map from a scammer. Blackbeard reluctantly goes with him and is clearly embarrassed that he has decided to pursue the non-existent loot on the island.

Of course, Stede is dressed to fit the occasion. He’s wearing something that looks like it came straight out of an Indiana Jones film, which once again makes sense with his character. For Stede, the life of a pirate is full of fun and adventure, which is in stark contrast with Blackbeard’s more jaded view of the profession.

While the members of high society like to think they’re the most intelligent characters in Our Flag Means Death, it can’t be further from the truth. This becomes easy to see when Blackbeard and Stede crash one of their parties. Blackbeard is impressed and intimidated by them at first, but Stede assures him they’re a “fickle crowd” and aren’t worth admiring.

Blackbeard can’t be blamed for feeling a bit nervous around the crowd, who wear garish expensive clothing to reflect their status in society. These period costumes and makeup seem to be exaggerated to underscore how comical the characters (and what they stand for) really are.

Spanish Jackie has quickly established herself as a badass who nobody should mess with, and her outfits on the show reflect that. As a business owner with 20 (now 18) husbands, she’ll do whatever’s necessary to protect her assets.

One memorable outfit she dons is a striking red suit, which she accessorizes with chains and a leather belt. These all complement her strong personality, with the vibrant red color reminding everyone to look when she enters a room, as it’s the kind of ensemble that demands attention and evokes intimidation.

When Stede visits the “Republic of Pirates” with Lucius for the first time, he’s beyond excited to finally be able to introduce himself as the gentleman pirate to his fellow professionals. Despite Lucius’s several warnings and concerns about their monochromatic ensembles, Stede reminds him that it’s better to be overdressed than underdressed.

RELATED: 10 Best Romantic Comedies That Stand Out, According To Reddit

Stede is, indeed, overdressed when he makes it to the dingy location, but he doesn’t mind one bit. After all, his impeccable jacket with its intricate patterns and perfectly-placed buttons looks too good to be stored in a closet.

Taika Waititi plays his own character in the romcom, Blackbeard, and he doesn’t exactly have a wide array of costumes during the first season. He sometimes tries on Stede’s clothes, but often just dons his signature black leather jacket and matching pants.

It’s clear that the point of the outfit is to reflect Blackbeard’s persona as an unstoppable and renowned badass of the seas. It’s fascinating to see how he changes his clothes to represent his state of mind, as viewers may recall how he embraces more colorful and flowy ensembles when he feels like showing his more vulnerable (and arguably truer) self.

Whether fans like them or not, Izzy and the crew are an invaluable part of the story. Their costumes don’t really change throughout the show, which represents how despite Blackbeard’s transformation into Ed, Izzy’s group remains the same, with the side characters often just staying in the background.

Like Blackbeard, they wear a lot of leather pieces and chains, with Izzy setting himself apart through a more polished attire. Considering how he sees himself as his captain’s righthand man and spokesperson, the touch of formality is a brilliant addition to his look.

It’s funny to think how Stede’s unbelievably intricate outfits are actually his idea of appearing strong and brave, as when he’s feeling insecure, he dons what he considers “pajamas.” When his crew confronts him about it, he hilariously backtracks and claims that it’s his “battle jacket.”

The long yellow silk robe is actually more fashionable than he makes it sound. The muted color complements the show’s palette well, and viewers who pay close attention will see that just like the rest of Stede’s wardrobe, it has some well-designed details weaved into the obviously pricey fabric.

Some of the best quotes from the show come from Jim, which is ironic considering how Jim only really speaks during the latter half of the first season. For the first few episodes, fans really only see Jim as a daunting and mysterious figure with a cool outfit.

That ensemble, along with the fake nose and beard, was meant to cover up Jim’s identity for the longest time. It looks much better when Jim finally gets rid of the fake props and just embraces that outfit and re-introduces the crew to the new (but same old) Jim.

He may have only appeared for a few minutes, but King George has made a lasting impression on fans thanks to the comical scene about him naming a decree. The moment is memorable in large part due to his elaborate ensemble, which viewers can only assume is fit for a king in that world.

From his curly long wig to his shiny rings, every single detail of the royal garment has seemingly been designed to show audiences that he holds the highest position of authority in the land. When viewers rewatch that scene, they’ll likely pick up even more details like the carefully-placed pearls around his neck and the woven patches on his sleeves. It’s the fanciest attire on the show so far and fans can only hope they’ll see more of him in future episodes.

NEXT: 10 Period Movies With The Best Costumes

Saab is a freelance writer for Screen Rant. She’s based out of Metro Manila, Philippines, where she lives with her partner, two fat cats, and two hundred houseplants. She’s passionate about all things pop culture and design. When she’s not typing, she’s tending to her indoor garden or watching true crime stories on Netflix.