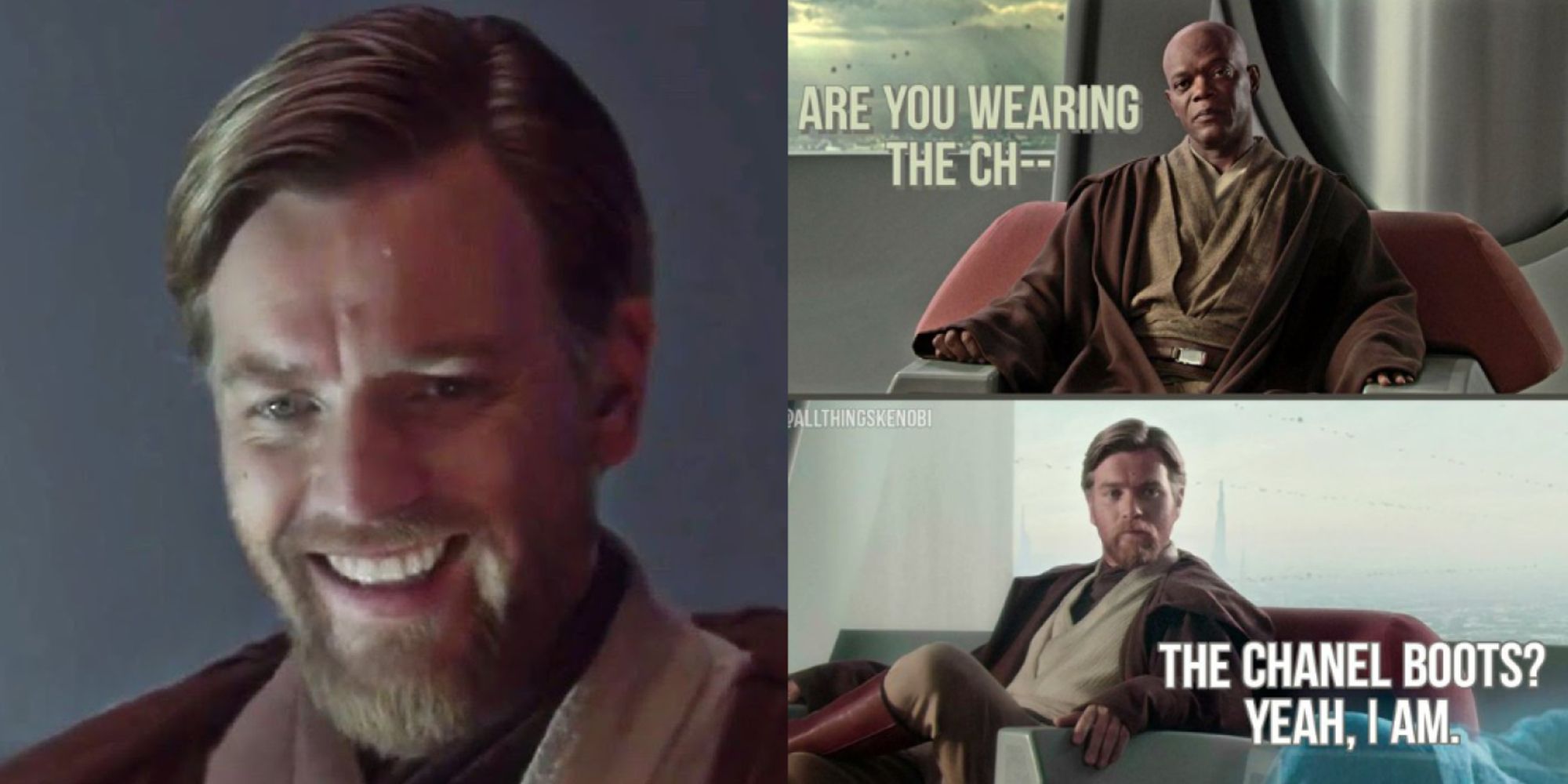 With the release of Obi-Wan Kenobi and Ewan McGregor’s triumphant return to the role that he played so memorably in the prequel trilogy, the appeal of Obi-Wan Kenobi is as strong as ever. As fans wonder if season 2 will take Obi-Wan to Mandalore, the roguish Jedi Master has been included in dozens of memes that perfectly capture his courageous and wily personality.

Whether it’s his casual sassiness in the face of danger, his contribution to Anakin Skywalker’s fall from grace, or his stylish Jedi boots, there are lots of reasons Obi-Wan Kenobi continues to have the high ground and make fans say, “Hello there!”

Obi-Wan Kenobi Has Always Been Cheeky

The prequel trilogy established that the wiliness in Obi-Wan’s later years came from an irrepressible sassiness in his younger days. As the padawan to rebel Jedi Master Qui-Gon Jinn, it wasn’t surprising that Obi-Wan made sarcastic remarks about trade negotiations and referred to Jar-Jar as a “pathetic life form.”

It’s possible that Obi-Wan simply used humor to diffuse tense situations, but his cleverness did belie an arrogant streak; Obi-Wan felt he was up to the task of training Anakin Skywalker, and he may not have been prepared in the way his master was.

Anakin and Obi-Wan’s relationship was unique because Anakin was already considered too old to begin training as a Jedi, and with Obi-Wan only recently able to complete his trials to become a Jedi Knight, their similarities in ages meant that they were closer to brothers than a student and his teacher.

Just like in this Invincible meme, Anakin had trouble listening to his master and often disregarded his cautionary words in favor of taking risks. The more Obi-Wan tried to rein Anakin in, the more his apprentice pushed him away.

Obi-Wan Brought On A Lot Of His Own Problems

As Anakin’s mentor, it was up to Obi-Wan to help him navigate his incredible Force abilities while maintaining the sensibilities of the Jedi Order and the Republic. Unfortunately, even after he helped end the war by defeating General Grievous, he’d already driven Anakin into Palpatine’s sphere of influence by making him a spy for the Jedi Council.

Had Obi-Wan “kept his concentration here and now where it belongs” as Qui-Gon suggested, he might not have let his anxieties and self-doubt get the better of him when trying to guide Anakin. He carried the pain of his failures for decades after Anakin struggled under the burden of being the Chosen One.

Obi-Wan Was A Bold One

Obi-Wan could afford to be a little cocky because he approached most things with methodical precision, and was confident enough in his abilities to be victorious against any enemy. One of his most powerful opponents was General Grievous, and the two shared an adversarial relationship that included exchanging barbs as well as blows.

One of Obi-Wan’s best lightsaber duels involved Grievous, one that the Jedi handily won despite the odds. Obi-Wan’s “bold” streak, like Qui-Gon Jinn’s defiance, appeared to rub off on Anakin a little too much.

Obi-Wan Kenobi Was A Flashy Dresser

Though vanity isn’t a trait encouraged in Jedi, Obi-Wan knows how to stay sharp by looking sharp. As soon as he starts sitting on the Jedi Council, he debuts a shiny new pair of boots, which become comically obvious during certain scenes from Revenge of the Sith. The outfit he wears as Jedi Master is regarded as one of Obi-Wan’s best costumes ever.

This meme features Master Windu asking if Kenobi is wearing “the Chanel boots,” which both incorporate dialogue from The Devil Wears Prada and reference the fact that Mark Hamill wore a pair of designer (Gucci) riding boots in Return of the Jedi.

Obi-Wan’s Allegiance Was To The Republic

The more that Anakin exhibited riskier behavior and became closer friends with Senator Palpatine, the more Obi-Wan’s influence over his life wavered. Not only did he begin to doubt the intentions of his mentor, he questioned whether their relationship as friends could survive Anakin’s pursuit of a way to save his wife’s life.

As Anakin chose the dark side and a dictatorship, Obi-Wan continued to serve the Republic and democracy. Ironically, as Obi-Wan tried to rein his apprentice and protect him from Palpatine’s schemes he became someone who contributed to Anakin’s downfall.

As Luke embarks on his hero’s journey, he is aided by an older, wiser Obi-Wan who acts as both friend and mentor. He imparts important life lessons to his callow ward about the ways of the galaxy and the Force, embodying similar characteristics to other great figures in fantasy, such as Gandalf the Gray.

Despite being gray himself at the point when he guides Luke, he hasn’t lost any of his playfulness. He still retains the sarcasm and twinkle in his eye that he did when he interacted with Luke’s father during their strongest years of friendship.

As penance for his hand in fumbling Anakin’s development and eventual turn to the dark side, Obi-Wan lived on Tatooine for more than a decade monitoring Luke and watching for signs of strength in the Force. What he never told Luke was just how much he had failed his father, which included leaving him for dead on Mustafar.

This meme reveals what would be true if Obi-Wan had been more opaque with Luke during their interactions, but instead, he chose to let Luke find out some things for himself. Had he been completely honest with Luke from the beginning, there’s a chance Luke would have never embraced his destiny and the Jedi Order would have never been restored.

Obi-Wan Was So Popular He Got His Own Spin-Off

After seeing how well McGregor portrayed Obi-Wan throughout the prequel trilogy, fans couldn’t wait for him to return to the galaxy far, far away. While initially a movie appearance was planned, the surge in popularity of live-action series on Disney+ meant that he should get his own spin-off.

To the delight of fans not only did McGregor return but so did Hayden Christensen, who finally got to portray Darth Vader in his suit for longer than a few minutes at the end of Revenge of the Sith. It not only added to Obi-Wan’s story but Anakin’s as well.

Though Obi-Wan Kenobi was a divisive series, it did feature an unexpected aspect that fans didn’t realize they needed; scenes involving Obi-Wan interacting with a young Princess Leia. Fans had already gotten to see him interact with Luke the most before his death, but seeing him connect with Leia had just as much impact as he passed on valuable lessons for her to incorporate into her years as a leader.

Not only did Obi-Wan help her in matters of conscience and duty, but she also helped him confront some of his internal conflict and feelings of inadequacy, ultimately doing the most to reignite his righteousness after a decade of isolation. Their character development was unique and innovative instead of retreading the same tired narrative.

NEXT: Every Confirmed Rogue One Character Who Has Yet To Show Up In Andor

I’m Black So You Don’t Have to Be by Colin Grant review – where are we ‘really’ from? | Books

Anyone else not leaving the house without the...