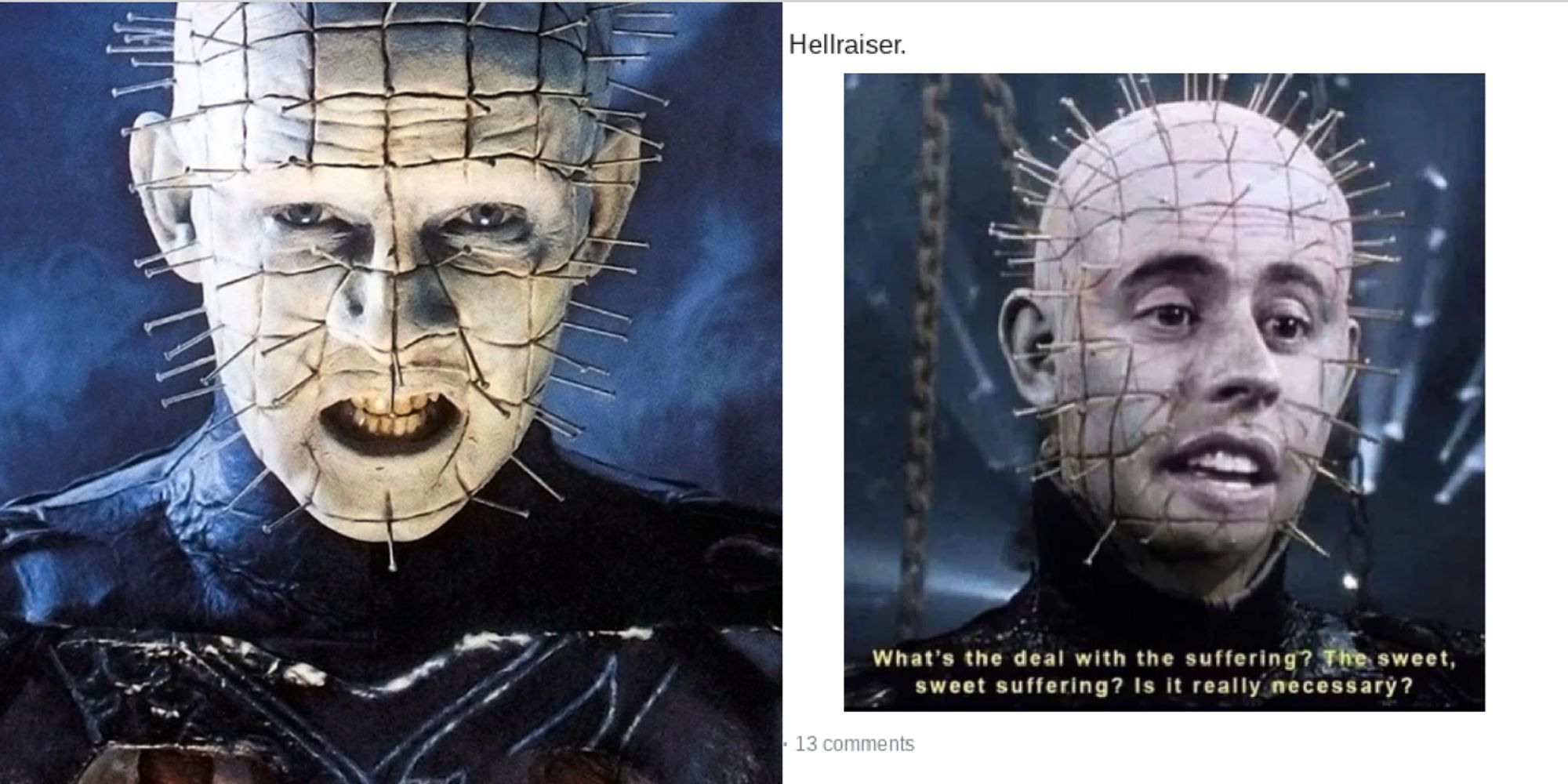 With the release of Hellraiser, a re-imagining of the 1987 Clive Barker classic, there’s never been a better time to celebrate cenobites, existential horror, and the latest in latex fashion. The horror genre staple has already had over half a dozen films released as part of its long-running franchise, each one becoming more meme-able than the next thanks to a healthy dose of self-deprecating and self-referential humor.

As later films under the Hellraiser banner strayed away from the themes of the original and went into self-parody territory, Hellraiser is a return to its spine-tingling roots, but there’s always something a little glib about Pinhead and the gang, as these hilarious memes can attest.

Hellraiser’s famous puzzle box, one of the most iconic horror props in cinema history, promises to reveal unspeakable delights from another dimension to its owner. All they have to do is be able to solve it, and the mysteries of the beyond are theirs, but it isn’t always what they’re hoping for.

Let’s just say, that if this is a movie prop that fans would love to own, they should be prepared for what’s inside. The puzzle box, like Pandora’s box, represents the repercussions visited on someone only interested in satisfying their own desires at the expense of their own safety, a truth they find out too late.

Hellraiser Fans Come In All Forms

Hellraiser fans are intrigued by the movie (and its sequels) for a variety of reasons; its philosophical nuance, its gruesome visual effects, and its biting humor, all of which help it stand out from other contemporary horror franchises.

This Hellraiser meme draws from Hellbound: Hellraiser II, which was made just one year after the original film’s release. Picking up right where its predecessor left off, Kristy finds herself in a psyche ward after experiencing the cenobites, but relives the horror against when her doctor releases the cenobites again and resurrects her step-mother.

One of the most revered aspects of Hellraiser is its underlying current of existential horror and philosophical dread, particularly surrounding Pinhead’s dialogue. One of the most iconic Pinhead quotes includes; “Ah, the suffering. The sweet, sweet suffering.”

This meme features Pinhead if he was played by Jerry Seinfeld, turning the iconic line into one of Seinfeld’s rants about nothing. Seinfeld might be a show about nothing, but Hellraiser is a series about everything; morality, accountability, and the human condition.

Not Every Hellraiser Movie Is The Same

Barker’s original Hellraiser, based on his short story The Hellbound Heart written in 1986, is widely regarded as the best entry in the franchise. As a horror villain that came from a book, Pinhead left an even more visceral impression once audiences could see him onscreen.

As time went on and the series grew, both Pinhead and his explorers from the furthest realms of experience looked more and more low-budget. Barker drifted in and out of involvement as a result, and the later movies are generally considered the worst (especially those that don’t include Pinhead’s original actor, Doug Bradley).

Not All Cenobites Are Created Equal

When the Leviathan creates a new Cenobite, it’s a crude and painful process. Human souls that are taken to the Labyrinth and face The God of Flesh become tortured and mutilated until they’re “angels to some, demons to others,” but barely resemble their former selves.

This meme pokes fun at some of the Leviathan’s less efficient designs, which includes a Cenobite named “Spike” who never made it into Hellraiser: Deader. Over the years, there have been many incredibly creepy Cenobites, with many more designs never making it into the film series. The creativity apparent in the prosthetic design is still some of the most effectively terrifying of any horror series.

Hellraiser Shows Victims The Worst That Could Happen

The newest Hellraiser might have changed what the puzzle box from the original movie looks like, but that doesn’t make the effects of opening it any deadlier. An updated look refreshes the franchise and capitalizes on the inventive visuals that have always characterized the franchise.

Using the Lament Configuration as part of a single-word motivational poster, this Hellraiser meme is hilarious because it makes the eventual horror of solving the puzzle box into something positive to aspire to.

While there are plenty of innocent people who have solved the Lament Configuration accidentally, its “sights” are usually reserved for the selfish and depraved who want to willingly unlock them. Pinhead and the rest of the Cenobites have their own sense of fair play when it comes to passing judgment on others.

Using a popular meme format involving Jerry questioning why Kramer has a bright neon red light emanating from his room, it only makes sense that Seinfeld’s most daring and open-minded character would solve the puzzle box and join the Cenobites. This wouldn’t be the first of Kramer’s wackiest hobbies to make him shout, “Oh mama!”

Hellraiser Has A Unique Style

Hellraiser has always had a distinct visual style that sets it apart from its contemporaries, especially in the ’80s, when the fetishistic Cenobites packed a lot of shock value. Even as their appearance has become less taboo, it’s still a franchise that can be recognized by its villains alone.

Since its initial release, Hellraiser has always pushed the boundaries of what’s considered societally acceptable. Its franchise has made fans uncomfortable for decades, and part of that is due to its explicit gore and the psuedo-erotic visuals that give the Cenobites their memorable appearance.

By comparison, series like 50 Shades of Grey seem very tame, but they’re nevertheless important. There will always be viewers who gravitate to this sort of material because it’s what they like or because they’re curious to see if they will, which illustrates the “forbidden” allure of both Hellraiser and the “sights” it promises.

Hellraiser Gets New Fans All The Time

With the release of the new Hellraiser, curious audiences may find themselves experiencing the franchise for the very first time. In addition to what promises to be a feast for the senses, it could lead them to watching the previous films as well, gaining an appreciation for the lore and world Barker built.

As with many long-running horror franchises like Halloween or Nightmare on Elm Street, fresh ideas (and fresh blood) become the life force that keeps them going. Sometimes new perspectives on an old story ensure that it will keep gaining fans (and victims) for years to come.

Previous article
Kathy Hilton Will Only Return To RHOBH If Lisa & Erika Are Fired
Next article
Every Marvel Disney+ TV Show So Far, Ranked By Importance To The MCU

The popularity of cannabinoids, such as CBD, has been...