10 Most Romantic Songs From Movie Musicals 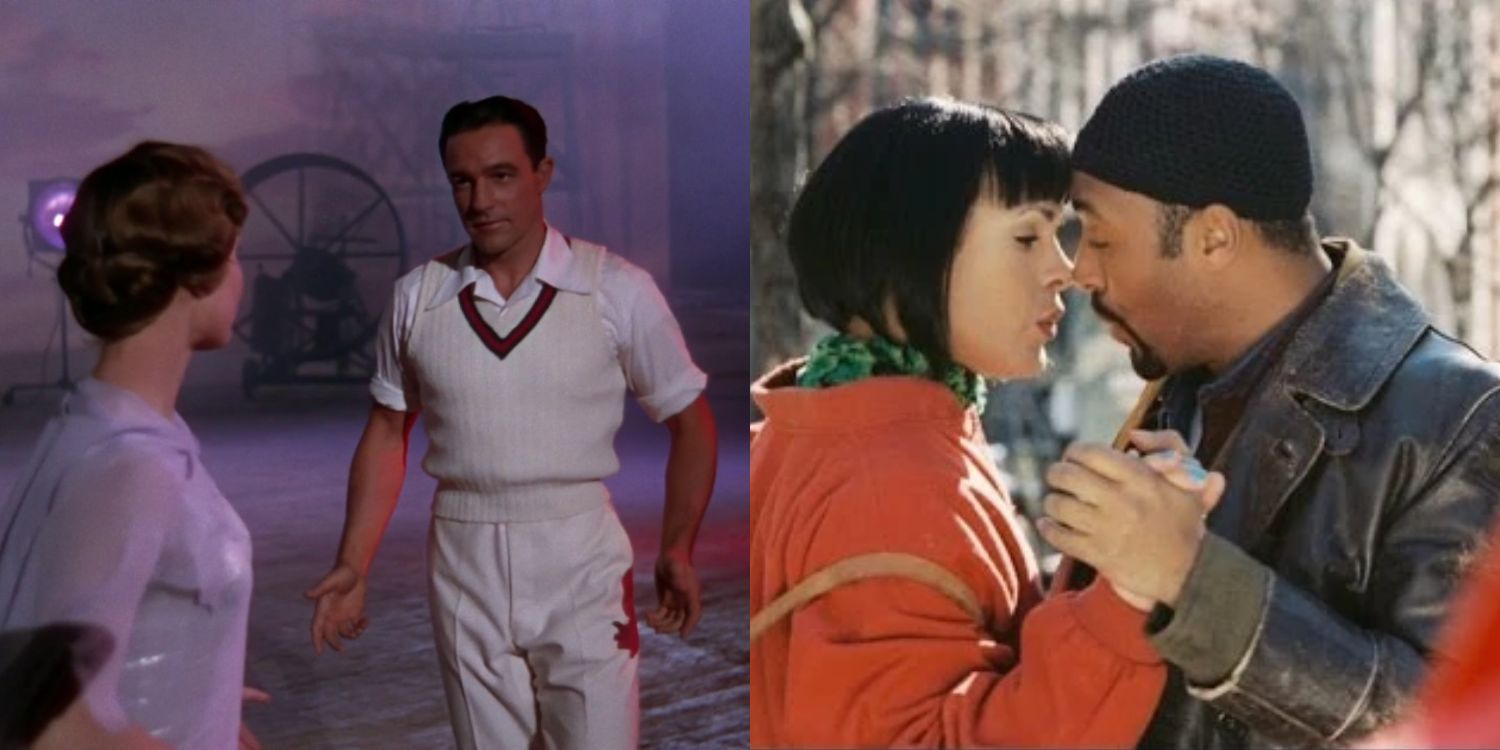 The latest movie musical, Matilda the Musical, is now in theaters, and is an absolute smash hit. Adapting the Roald Dahl novel of the same name, it tells the story of Matilda, a young girl who uses her brilliant imagination to inspire a revolution at her school against the cruel Miss Trunchbull, played by Emma Thompson. Matilda The Musical excites viewers with its energetic choreography and enthusing music, but it is missing one element that musicals are known for – a love song.

Whether sad and dramatic or joyful and goofy, love songs are among the most memorable moments in movie musicals, and as such, they have a special place in audiences’ hearts. It’s difficult to narrow down the best from the sheer amount of love songs across movie history. However, many have already stood the test of time and others will farther down the line. Encompassing the contexts of the song, the musical tones, lyrics, and creativity in storytelling, these love songs best tug at the heartstrings.

Singin’ in the Rain, even seventy years later, is still widely considered to be one of the best movies ever made. Starring legends Gene Kelly and Debbie Reynolds (and being the latter’s breakout role), Singin’ in the Rain is what Hollywood loves – a movie about the wonder of making movies. Kelly, playing Don Lockwood, declares his love for Kathy, played by Reynolds, in “You Were Meant For Me.”

RELATED: 10 Popular TikTok Sounds That Came From MusicalsWhat people might not know about this song is that it actually had an extensive history in movie musicals before 1952’s Singin’ in the Rain. While it was first used in 1929’s The Broadway Melody, this rendition by Gene Kelly is still the most popular and readily remembered. The scene stands out from other love songs in other musicals for its staging. From the classic dance break, ethereal score, and touching lyrics, “You Were Meant For Me” is classic Hollywood at its best.

After thirty-seven years, The Phantom of the Opera is set to close on Broadway in April 2023 as the longest-running show in Broadway history. For those who haven’t been able to see it or a touring show in all its grandeur, thankfully, there’s the 2004 film adaptation with the same stunning music and thrilling performances. In particular, many people weren’t expecting Emmy Rossum, nor Patrick Wilson to have such superb voices, which are on full display in their love song, “All I Ask of You.”

While other songs are momentous and encapsulate the inner desires of the characters, “All I Ask of You” and the rest of the music in The Phantom of the Opera are all dialogical. Christine and Raoul are speaking plainly about the love she wants in her life and that he can give it to her. It’s simply a declaration of love put to music with beautiful vocals that altogether make “All I Ask of You” stand the test of time.

There have been multiple versions of Cinderella’s story in movies, tv, and many of them incorporate music. Of course, there’s Disney’s Cinderella, with its own love song, “So This Is Love”. However, Rodgers and Hammerstein’s version is where the love story really comes alive with various songs, including “Do I Love You Because You’re Beautiful” and “Ten Minute Ago. In particular, the latter is a perfect encapsulation of the fantastical nature of love and thus is definitely among the best love songs there is.

Importantly, there are two fantastic versions of “Ten Minutes Ago”. The first came from the 1957 debut of Rodgers and Hammerstein’s Cinderella on television, featuring the legendary Julie Andrews in the titular role. Of course, she sings beautifully with such lovely intonation. Yet, there is a lot to love in Brandy’s version with Paolo Montalbán from the 1997 version. His strong and sturdy voice paired so well with her breathy and light tone, and the constant choreography in the scene showcased the full potential of the song.

Many movie musicals first get their start on the West End or Broadway, but in the case of Baz Luhrmann’s Moulin Rouge!, it was the opposite. The 2001 jukebox musical was a smashing success, earning an Academy Award nomination for Best Picture. It starred Ewan McGregor as Christian, a poet who falls in love with Satine, the star of the Moulin Rouge in Paris, played by Nicole Kidman. Their love came together for the epic and thrilling song, “Come What May”, which appropriately earned a Golden Globe nomination for Best Original Song.

RELATED: 10 Best Rock & Roll Musicals, Ranked By LetterboxdOn top of being a strong admission of their forbidden love and desire to get together despite the obstacles they face, “Come What May” plays an important role in the narrative of the story too. In the film’s story, Christian writes the song and puts it in the musical, Spectacular Spectacular, that the cabaret is putting on. Therefore, with each time he or Satine get to sing it, they can secretly sing to each other while presenting that they are performing for the audience.

While many love songs are long and slowly paced, 2005’s Rent features a fantastic, jubilant love song with “I’ll Cover You.” This moment is unbridled and pure joy as Collins and Angel reveal they are falling in love, committing themselves to each other. It is important for showcasing the love between two queer characters – just as “Take Me or Leave Me” does in its own way too – but “I’ll Cover You” is also the best snapshot of Rent’s ethos. Life is fleeting and for many, it can be difficult, but finding true love can give one the strength to go on.

While “I’ll Cover You” is quite a happy song in the film’s first act, it does have a reprise later on, which is not only the saddest song in Rent but among the saddest songs from all musicals. Collins sings at Angel’s funeral after they died, and it’s a heartbreaking rendition, especially when paired with “Goodbye Love”.

There is perhaps no love story more legendary than that of Romeo and Juliet, and its musical adaptation, West Side Story, is equally regarded as one of the best movie musicals of all time. Just last year, Steven Spielberg directed the second film rendition of West Side Story, and while the direction, cinematography, and performances shone through, there are several elements in which the 1961 version is vastly superior. Particularly, Spielberg’s version had Valentina, played by Rita Moreno, sing “Somewhere”, while Tony and Maria sang it together in 1961’s West Side Story.

Interestingly, Spielberg’s West Side Story is closer to the original stage version in this regard, but the decision to have Tony and Maria sing it gives “Somewhere” more depth and emotionality. They sing about finding a place for themselves where they can be together against all the obstacles trying to keep them apart. Overall, though, “Somewhere” is such a touching love song it resonates deeply regardless of who sings it.

Little Shop of Horrors is quite a dark movie musical, unexpected since the premise is about a giant talking plant. The film from 1986 is based on the off-Broadway musical, with music by Alan Menken, famous for his work with Disney, and directed by Frank Oz, the legendary puppeteer best known for playing Yoda in Star Wars. In “Suddenly, Seymour”, Rick Moranis’ Seymour declares his love for Ellen Greene’s Audrey, who reciprocates.

Suddenly, the soft-spoken Audrey comes alive with a stunning belting performance that will always stick with audiences. The song is all about connection, coming from two characters who have been defined by isolation in their miserable lives finding each other. It does also have an element of humorous irony since it’s catalyzed by the fact that Seymour’s killer plant just ate Aubrey’s boyfriend.

If there is one movie musical that deserves better recognition on par with the classics it’s 2006’s Once. Thankfully, it did get a staged adaptation that won the Tony Award for Best Musical in 2011. The Irish film centers on two aspiring musicians in Dublin, simply named Guy and Girl, played by Glen Hansard and Markéta Irglová – who actually composed all the film’s songs, including the incredible, “Falling Slowly”. It did win the Academy Award for Best Original Song, so it’s got that under its belt.

RELATED: 10 Songs From Musicals That Are Unexpectedly Difficult To Sing, According To Reddit“Falling Slowly” is simply about the hope for connection between people no matter how different they are, and the possibility that said connection could lead to love. The scene is simple. Guy teaches Girl, and they play together, with her perfectly matching him. From the folksy sound to the poignant lyrics, “Falling Slowly” is a love song truly unlike anything else heard in a movie musical.

Disney has no shortage of utterly fantastic love songs such as The Lion King’s “Can You Feel The Love Tonight” or Beauty and the Beast’s “Beauty and the Beast”. However, one that might beat those out, and one song deserving better recognition comparatively, is “I See the Light” from 2010’s Tangled. This was another contender for Best Original Song at the Academy Awards, and while it might’ve lost, “I See the Light” is Disney’s truest love song.

It focuses on Rapunzel and Flynn discovering their true feelings for one another as “the fog has lifted”. With touching performances by Mandy Moore and Zachary Levi, “I See the Light” is an epiphany put to a song that delightfully mixes elements of classic love songs with modern and popular music. Altogether, “I See the Light” rests safely above Disney’s fellow love songs.

Viewers might be best aware of “It Only Takes a Moment” thanks to Disney’s Wall-E, in which the lovable little trash compacter watches Hello, Dolly! religiously. There’s a reason they chose this movie and song among the plethora of great possibilities. As is demonstrated in the title, it’s all about that one moment, that spark that ignites the fires of pure love.

“It Only Takes a Moment” is a perfect example of a classic love song from a movie musical. It takes its time, but it’s not languid. It’s a snapshot of sentiments bursting through the characters’ seams. It’s no wonder it’s Wall-E’s favorite song.NEXT: 10 Best Jukebox Movie Musicals, Ranked By Rotten Tomatoes