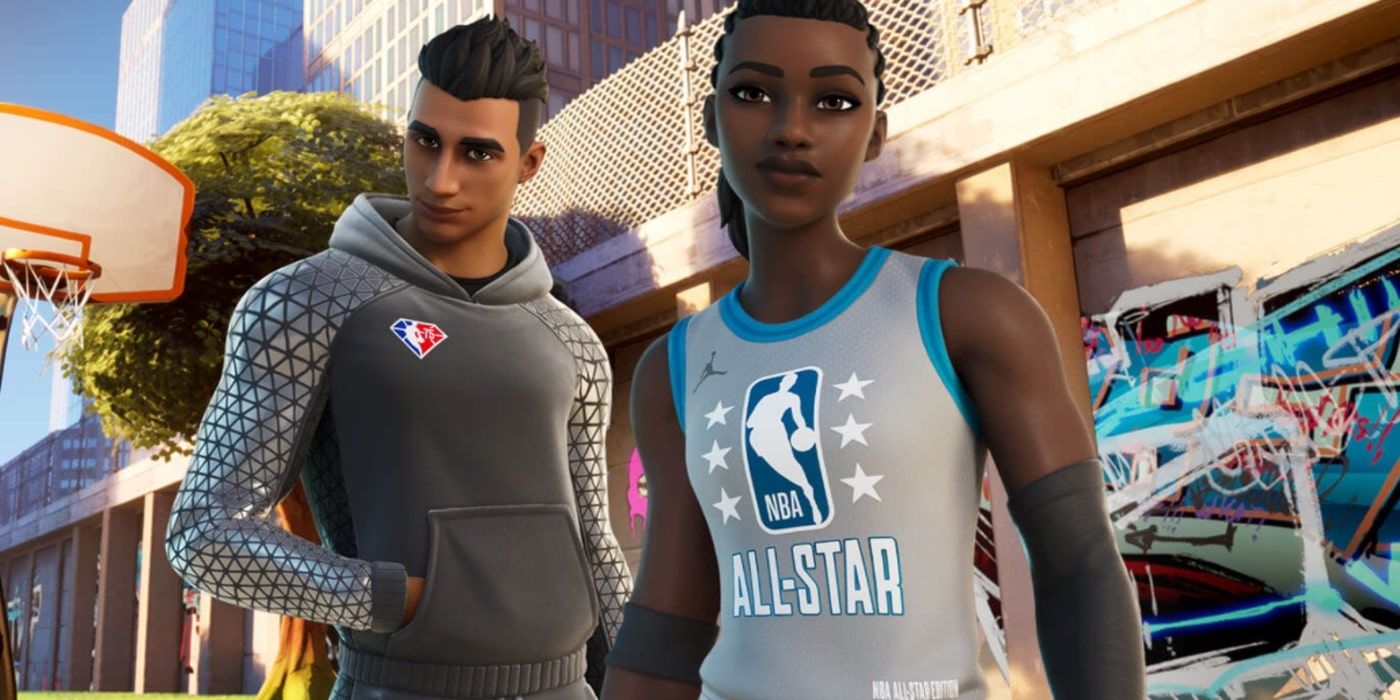 Fortnite has announced a new NBA crossover, bringing in a new All-Star hub and the chance to vote for an NBA celebration to become a future Emote.

In celebration of the NBA’s 75th Anniversary Season and NBA All-Star 2022, Fortnite has released an exclusive NBA 75 All-Star Hub where players can vote for an NBA celebration to become a future emote. This marks the latest in a series of crossovers that have made their way to the world-famous battle royale game by Epic Games. In a similar matter, Fortnite collaborated with the NBA for summer 2021, in anticipation of the 2021 NBA Playoffs, unveiling new cosmetics, emotes, games, and a crossover event that featured uniforms from all 30 NBA teams.

Fortnite is heavily known for its crossovers, with some of its notable partnerships including Star Wars, Naruto, DC’s Batman, an abundance of Marvel characters, and several famous musicians such as Ariana Grande. Many more characters from different popular media properties have made special appearances in Epic’s battle royale, helping to keep the game profitable with their accompanying virtual accessories, exclusive emotes, and new skins. Though acquired with V-bucks or earned from the battle pass, skins and cosmetics from crossover events and popular themed content in Fortnite have been shown to be highly valued by players. With the game’s recently-introduced Chapter 3, Epic Games revealed one of the games’ biggest crossover to date, bringing fan-favorite Marvel superhero Spider-Man to Fornite along with his web-shooters to allow players to easily traverse around the map.

Announced on the official Epic Games website, Fortnite has received a brand-new NBA crossover event to celebrate the NBA’s 75th anniversary Season and All-Star 2022, bringing NBA 75 All-Star Hubl and allowing players to vote for an NBA celebration to become a future Emote. Described as the “NBA 75 All-Star Hub,” players will be able to explore a brand-new basketball-themed area where they’ll be able to view NBA highlights, shoot hoops to earn a new spray, hang out with friends in many of its amenities and vote for a future NBA Emote. Additionally, the new “NBA 75 Set” is also available which includes 10 outfits along with the returning “In The Paint Set!” outfit set that comes with uniforms of all 30 NBA teams.

Despite having only minor crossover sports events, Fortnite‘s dive into sports collaborations have been some of their biggest yet. In 2021, Epic Games and Verizon teamed up to create a massive Super Bowl LV celebration inside of Fortnite. This added a full stadium hub, a new game mode, mini-games, and rewards for players to unlock by partaking in an exclusive limited-time scavenger hunt. Uniforms were also added and returned this year to the item shop as a part of the Super Bowl LVI.

Fortnite‘s latest NBA crossover is a genius way to celebrate a major sports event and allows players to fully immerse themselves in a hub filled with basketball action. Needless to say, Epic’s popular battle royale is a prime example when it comes to collaborations, and its sports crossovers are a great way to liven the title for players from other fandoms and unite sports fans.

Sam is a narrative designer and writer from Florida. Having studied game design and comms, he loves to keep up with industry news, work on indie projects and talk about retro gaming. You can follow him on Twitter @scriptslash