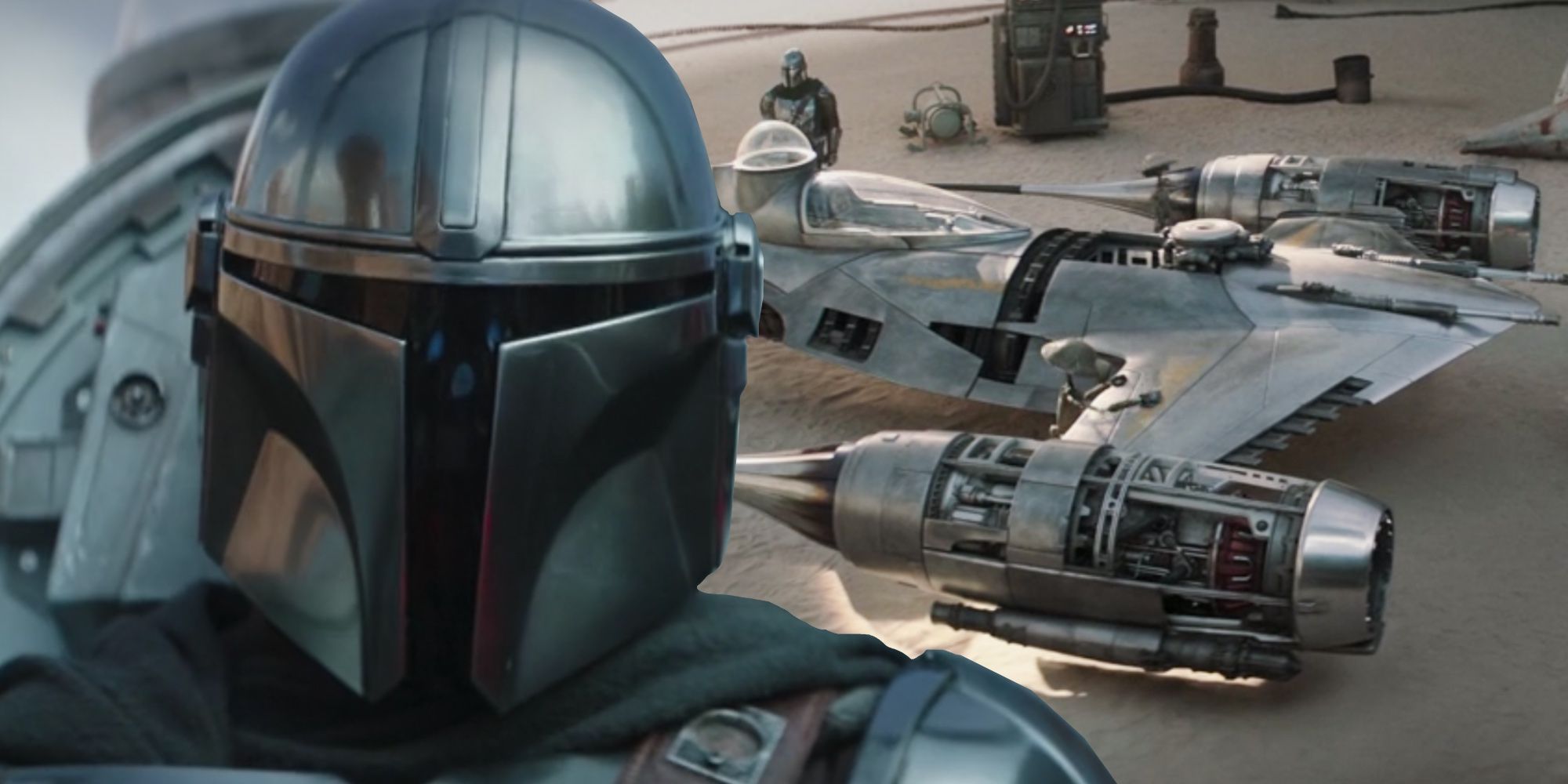 The Book of Boba Fett features the return of Din Djarin along with a brand new ship to replace his Razor Crest: an N-1 Naboo starfighter.

Warning! Spoilers ahead for The Book of Boba Fett episode 5

The Book of Boba Fett’s episode 5 is surprisingly dedicated to the return of The Mandalorian’s Din Djarin (Pedro Pascal) who shows off his new ship: an N-1 Naboo starfighter. With the destruction of his Razor Crest in The Mandalorian season 2, Djarin now has a custom-built and modified version of the starfighter first made famous in Star Wars: Episode I – The Phantom Menace. While the Razor Crest was quite the formidable gunship, the Mandalorian’s new N-1 is incredibly light and fast, providing Djarin with an impressive replacement in the Star Wars galaxy going forward.

In the first half of The Book of Boba Fett episode 5, Din Djarin reunites with those who remain from his clan, The Children of the Watch. Tragically, Paz Vizla and the Armorer are the only survivors after the Imperial attack on the planet Navarro. However, Djarin eventually had no choice but to admit that he had removed his helmet in order to find Grogu. In doing so, the Mandalorian was forced to leave his clan until he can redeem himself. As such, the rest of the episode features Djarin’s return to Tatooine, meeting with Mos Eisley mechanic Peli Motto (Amy Sedaris) who had promised him a replacement for his Razor Crest.

That being said, Motto doesn’t actually have a replacement Razor Crest for the Mandalorian, instead offering the frame of an N-1 Naboo starfighter that needs plenty of work. Not unlike Anakin Skywalker who built his own podracer on Tatooine as a child, Djarin and Motto work together to get the ship repaired, modified, and ready to fly by the end of the new episode. While the Mandalorian has made the classic Star Wars ship his own, the N-1 model has quite the history as seen in past films of the Skywalker saga (and not just in the prequel trilogy with The Phantom Menace). Here’s what to know about the Mandalorian’s new ship.

The Naboo Starfighter In The Phantom Menace Explained

In The Phantom Menace, the first episode of the Skywalker saga sees the N-1 starfighter being deployed during the battle between the Naboo and the Trade Federation who had created an oppressive blockade. Existing as a special model manufactured specifically for the Queen of Naboo’s Royal Security Force, the N-1 starfighter is a single pilot ship built for speed and functionality. Featuring its own hyperdrive engine despite being so small, the N-1 can also house an astromech while sporting impressive blaster cannons and the ability to fire proton torpedoes. During The Phantom Menace, a fleet of N-1’s were dispatched to engage with the blockade which also included young Anakin Skywalker who had unintentionally joined the battle in the starfighter he had been hiding in. However, the gifted pilot and Jedi-t0-be managed to deliver the fateful blow that saved the Naboo, destroying the primary Trade Federation control ship from the inside out.

Nearly 40 years later in the Star Wars timeline, the Mandalorian has customized his own N-1 in The Book of Boba Fett, making it even faster than average with plenty of modifications. Likewise, Motto also took out the astromech port to seemingly accommodate potential bounties the Mandalorian may need to deliver off-world. The majority of the N-1’s classic yellow paint was removed as well, revealing the gray and silver underneath (which makes it much more Djarin’s style).

While The Phantom Menace is where the N-1 truly shines apart from Din Djarin’s impressive test flight seen in The Book of Boba Fett episode 5, the Naboo starfighter can also be seen in a handful of moments throughout the Star Wars timeline. Briefly seen escorting the Senator of Naboo in Star Wars: Episode II – Attack of the Clones, the N-1’s were also added into Return of the Jedi by creator George Lucas when he re-edited the original trilogy of films in 2004. These special editions of the original Star Wars trilogy added new CGI elements, characters, and entire scenes to the first three films. As a result, a scene depicting celebrations all over the galaxy after the second Death Star’s destruction was created for the sixth episode, and one shot in particular features crowds on Naboo cheering with the N-1’s flying overhead. However, thanks to the starfighters being featured in Star Wars: The Rise of Skywalker’s Final Alliance of ships assembled by Lando Calrissian, the N-1 model has been featured at least once in every Star Wars trilogy.

Why The Mandalorian’s New Ship Is A Naboo Starfighter

While there’s no major tie or significant reasoning for why the Mandalorian’s new ship is an N-1, there are plenty of reasons why it’s exciting and a good fit for Din Djarin. Not only is it a ship from an older era like Djarin’s Razor Crest (meaning it’s easier to stay off the grid), its incredible speed is a strong benefit that makes the Mandalorian’s new ship a cut above, especially when he shoots off and escapes two New Republic X-Wings on patrol who have no chance of catching him. Furthermore, it also deepens the connections to the prequel trilogy in this post-original trilogy era, something several Star Wars fans love to see with new projects. As a prime example beyond the ship being iconic to the prequel films, the N-1 also creates even more similarities between Din Djarin and Anakin Skywalker that have already been established. Not do they both have experience piloting N-1’s, but Djarin building his ship on Tatooine piece by piece is extremely evocative of young Anakin building his podracer in The Phanom Menace as well.

At the end of the day, Din Djarin was always going to get a replacement ship as impressive as the Razor Crest yet unique enough for Disney to sell a whole new wave of toys. Seeing as how it’s practically begging to be made into a LEGO after Djarin built the ship himself, the custom N-1 certainly fits the bill. Furthermore, the Mandalorian’s new ship strikes a dynamic balance of nostalgia while still being unique with its own style and modifications the Mandalorian has installed. As a result, it’s going to be interesting to see if Din Djarin will fly his ship again before the end of The Book of Boba Fett, or if Star Wars fans will have to wait until The Mandalorian season 3 to see the new Naboo starfighter in action again.

More: Why The Darksaber Gets So Much Heavier In Combat

The Book of Boba Fett releases episodes weekly on Disney+

90 Day Fiancé: Gino’s Unearthed Photos Show How He Looks Without The Hat

Kevin Erdmann is one of Screen Rant’s staff writers. With a major in Cinema Studies and a minor in Comics and Cartoon Studies from the UofO, Kevin is pretty sure he’s writing for the right site. While Kevin is a huge Marvel fan, he also loves Batman because he’s Batman and is a firm believer that Han shot first. Disney also shares a big part of his fan patronage. Kevin lives in Oregon with his wonderful wife and sinister cat who is no doubt currently plotting his demise.