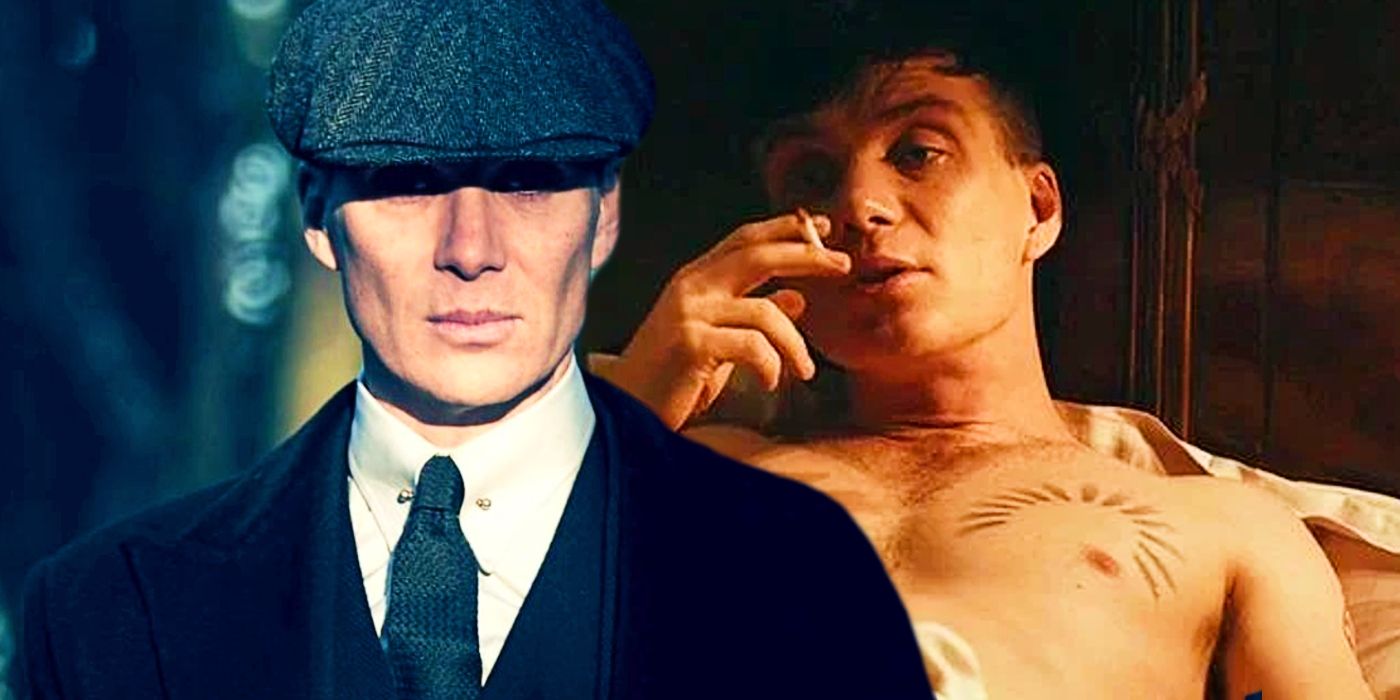 Tommy Shelby has sun rays over his left breast, and the absence of religious faith in his character may explain why he chose to get them tattooed.

Peaky Blinder’s main character Tommy Shelby has a tattoo on his breast that resembles sun rays, but what does it mean? Tommy had many tattoos, each of which holds a range of important meanings. The meaning of his chest tattoo, however, may extend beyond what the design is actually based on.

Thomas Shelby leads the Peaky Blinders – a powerful Birmingham-based gang – following World War I. He jumpstarted the business out of a desire to move his family up in the world so they would always be able to defend themselves and become untouchable. Throughout the series, he is shown to be an independent, stoic, and ruthless boss. However, audiences are also presented with the other, more easy to empathize with side of the character, which commonly emerges in the relationships he shares with his romantic interests, namely Grace Shelby (played by Star Trek actress Annabelle Wallis), who proves his heart is as vast as his merciless nature.

The dual sides of Tommy Shelby are expressed through his chest tattoo. According to the tattoo designer themselves, the sun rays designed in an array over his left breast are inspired by a real-life tattoo, which usually would have Jesus in the middle of the rays. Jesus is left out of Shelby’s tattoo, which is a choice that speaks to Tommy’s views on religion and faith, as well as potentially alludes to his life of crime. The design is also thought by some to be similar to that of the Roma wheel, which can be seen to represent Tommy’s Romani heritage and his desire to live a free life.

The breast tattoo holds meaning that may explain why Tommy Shelby’s relationships, both platonic and romantic, often end poorly. By holding his freedom closest to his heart in the form of a permanent tattoo, it implies that he will not be bound by anything, even by marriage and love. The overarching meaning of it does end up clashing with his marriage to Lizzy, who he is tethered to against his wishes. Although, he showcases his freedom from his wife by informing her he does not intend to remain loyal to her, only that he will remain as such under the roof of the same house.

Thomas Shelby’s chest tattoo represents the loyalty he harbors to himself and the life he chooses to lead. It also serves as a reminder of the aspects of Tommy’s life he holds closest to his heart. In Peaky Blinders, Tommy has held true to these beliefs – potentially in part because his chest tattoo has always been there to remind him.

Next: Peaky Blinders True Story: How Much Really Happened

What Mike Is Up To After 90 Day Fiancé: Before The 90 Days Season 5

Zoe Jordan is a young freelance Movie/TV Features Writer for Screen Rant. She has become well-versed in Film and Television from the various cinema study classes she attended at SUNY Purchase in NY. She has key knowledge in film subjects and genres such as Italian Neo-Realism, Film Noir, and the history of horror. Miss Jordan has experience writing for theater and won a semi-finalist placement for short horror screenplay in the New York City Horror Film Festival in 2021.

Based out of Florida, Zoe has grown a veritable interest in publishing her writing, honing her style, and working to gain notice in the film industry. Her goal is to become a successful screenwriter, and preferably, write original horror shorts and feature length films.