A blinding dust storm moving at hurricane force winds of 90mph tore through half of Kansas, as trailers were knocked over in Colorado and fires spread throughout Oklahoma on Wednesday.

The wild weather affected 100 million people in states throughout the Midwest with the National Weather Service calling it a ‘historical weather day.’

‘The Central US has never seen a December storm like this,’ tweeted Bill Karins, a meteorologist for MSNBC, saying it was ‘multi-hazard, life threatening weather today.’

Winds of 70 to more than 100 miles per hour have already torn through the area, ripping off roofs, overturning 18-wheelers and leaving at least 380,000 people without power as of 8.30pm Wednesday throughout Colorado, Kansas, Nebraska, Iowa and Missouri.

It came amid some record-high temperatures, just days after dozens of powerful tornadoes swept through the area, flattening buildings in nearby Kentucky. 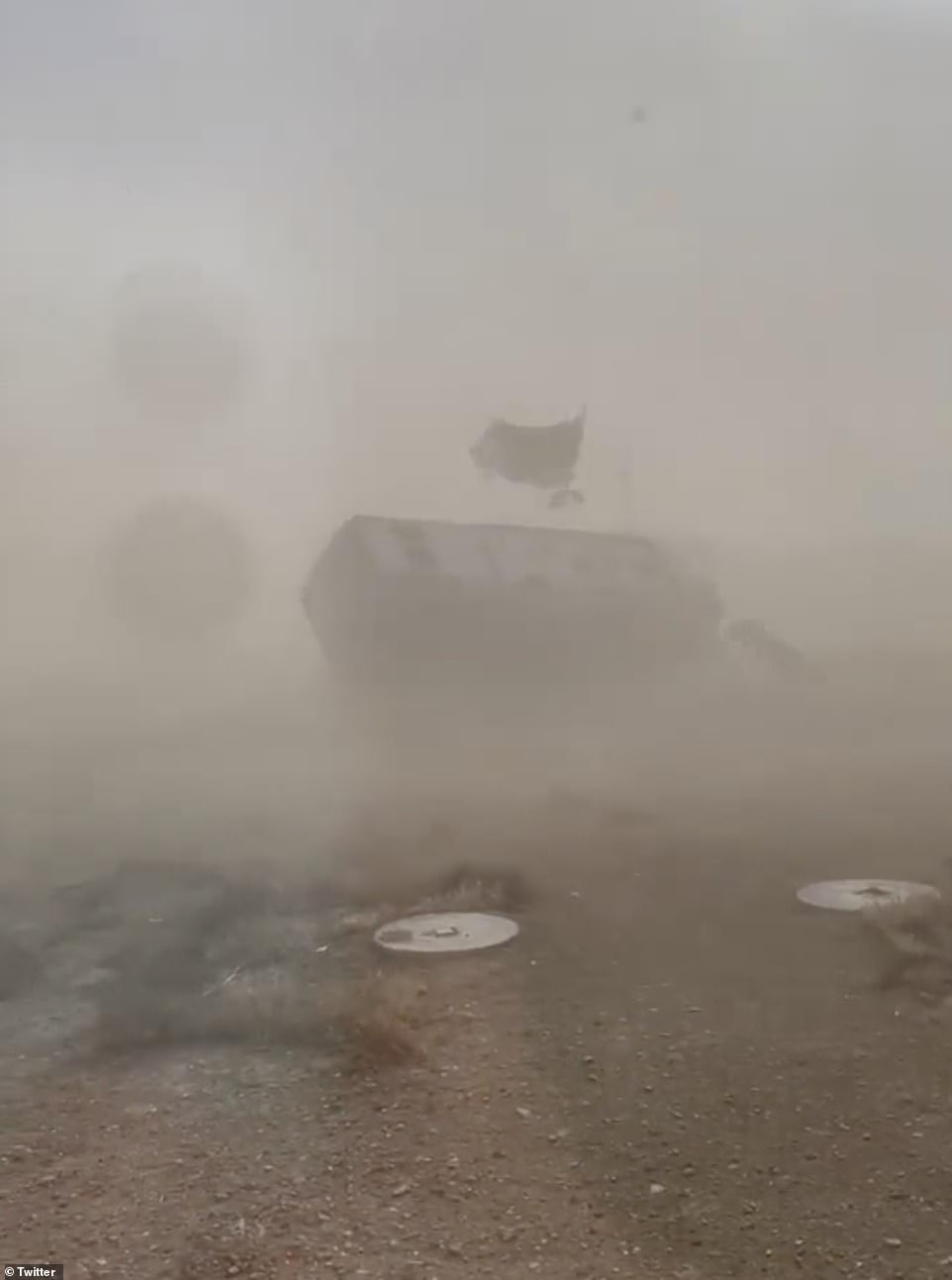 KANSAS: Photos and video posted to social media showed visibility greatly reduced in the dust storm that spread over Kansas 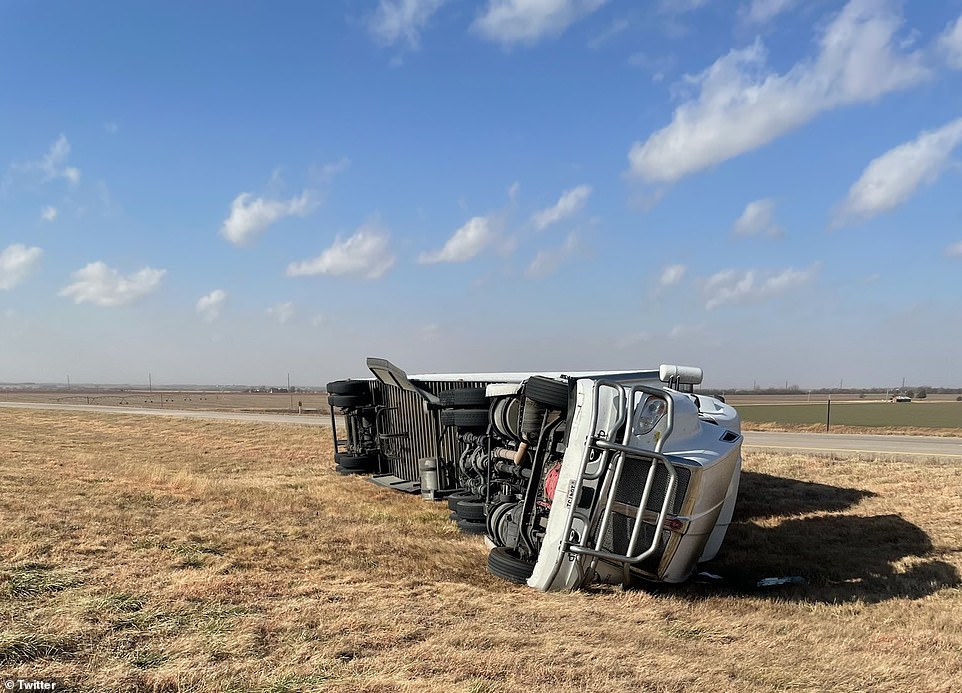 MISSOURI: The winds were so severe, at 90mph, that they even managed to knock over an 18-wheeler in the storm 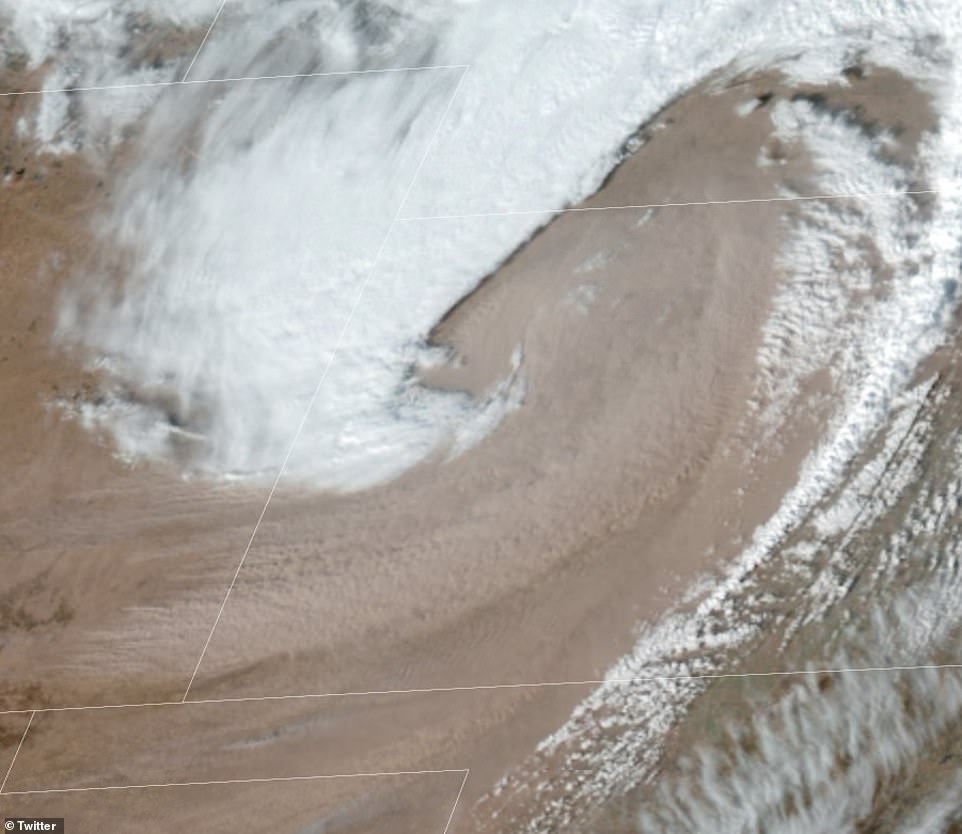 The storm hovered over Kansas Wednesday evening, extending into Missouri and Colorado

Footage of the powerful storm in Kansas, where wind gusts reached up to 90mph, show the winds whipping red dust at such high speeds that KSN meteorologists warned ‘It’s zero visibility,’ as drivers were forced to pull over and put on their brake lights.

‘Visibility was extremely low,’ Jaclyn Liberator, who took a video of the dangerous storm, told KSHB.

Dust storms and earthquakes: Kansas is hit with several natural disasters in one day

The first occurred on Tuesday afternoon shortly after 4pm when a 2.5 magnitude quake shook Gypsum.

Then in the early hours of Wednesday, a 4.0 magnitude quake rocked the same area, and a third, this time at a magnitude of 3.4, struck later in the morning.

And a fourth,  3.1 magnitude quake, occurred just after 12.17pm on Wednesday.

The National Weather Service has issued a severe wind advisory for Leavenworth County, and urged residents to seek shelter and avoid windows in the storm, while the Kansas Department of Transportation also reported that highways throughout the state are closed, and staff had to be evacuated from the air traffic control center of the Kansas City International Airport, likely causing diversions and delays during the busy holiday season.

The National Weather Service in Wichita said wind in the city of Russell hit 100mph at the airport at about 4pm.

But the brunt of the storm appeared to strike Hutchinson and central Kansas between 4pm and 5pm, the Topeka Capitol Journal reports.

In just that one hour, power outages around Hutchinson shot up from 48, impacting around 500 customers, to more than 455, affecting more tan 5,700 customers.

And by 5.15pm, the number had limed to 672 outages, with some 7,835 customers left in the dark, as emergency personnel throughout the region responded to downed powerlines and poles.

A large storage facility in Hutchinson also collapsed Wednesday night, after witnesses saw the roof blow off from one side, as if ‘it was hinged,’ around 6pm, KWCH reporter Alex Flippin tweeted, with another reporter, Greg Payne on the scene as debris fell from part of a roof at the Kansas City’s Charles B. Wheeler Downtown Airport.

Officials say the roof of one of the hangars was ripped off during wind gusts up to 77 mph.

‘We have a roof that just came off,’ Payne said on his live broadcast Wednesday night, noting he wasn’t sure what he heard until he saw the debris start to fall.

The winds also sparked fires throughout the central and western parts of the state, Jane Welch, a spokeswoman for the state’s Division of Emergency Management told the New York Times, saying at least one home was destroyed, but no deaths or injuries were reported.

Forecasters had earlier warned that the gusty winds, dry air and warm temperatures would create conditions rife for ‘an extreme to potentially catastrophic grassland fire.’

Eric Metzger, a meteorologist at the National Weather Service in Wichita, said the biggest blaze was in Russell and Ellsworth counties in the central part of the state, where two fires ‘merged together into one massive fire.’

‘It’s probably about 40 miles long,’ he said, noting that before Wednesday, Kansas had not had any rain for over a month.

Welch also noted that the winds were so strong that it was too dangerous for emergency crews to fight the fires from the air, and the National Weather Service warned people they may need to evacuate.

In Wichita, meanwhile, the Air Quality Index was reported at 99, putting the city on the verge of unhealthy levels.

‘We are advising residents, especially those in sensitive groups, to consider limiting time outdoors until air quality improves,’ city officials wrote on Twitter.

At 3pm, Gov. Laura Kelly issued an inclement weather declaration for Shawnee County, effectively closing state offices in the area, as a tornado warning had been issued for the western part of the state. 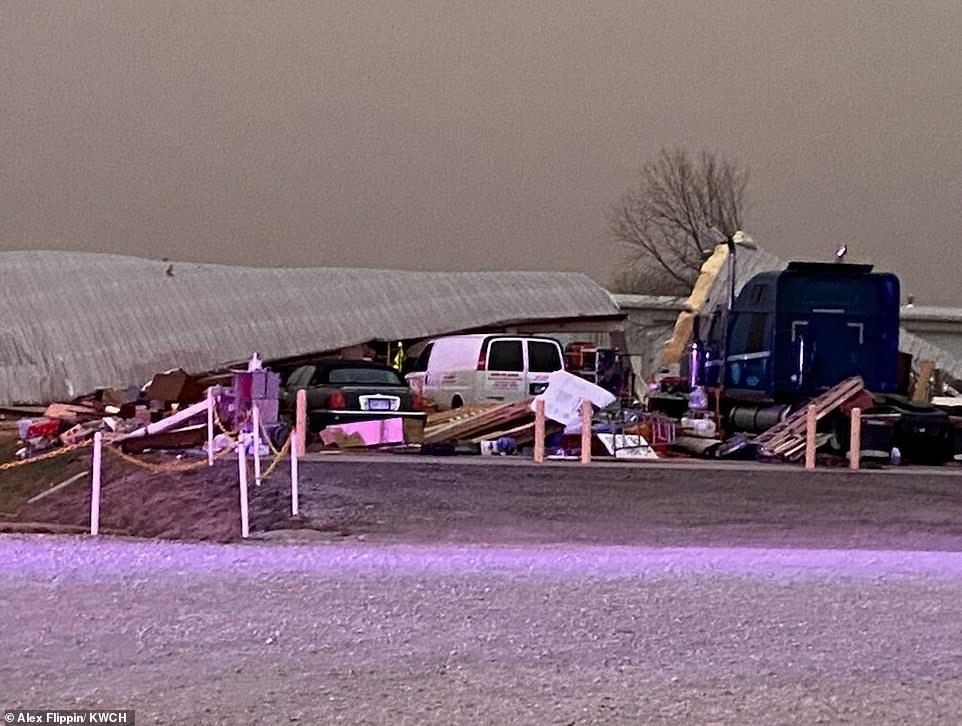 KANSAS: A large storage facility collapsed in Hutchinson, Kansas collapsed after witnesses saw the roof blow off from one side as if ‘it was hinged,’ around 6pm, KWCH reporter Alex Flippin tweeted

In Colorado, meanwhile, the winds were powerful enough to knock down tractor trailers, with more than a dozen down in the Pikes Peak region.

The Colorado Department of Transportation tweeted that several roads were closed due to the high winds and the Jefferson County Sheriff’s Office in Golden said a highway was closed due to downed power lines and a truck that toppled over. 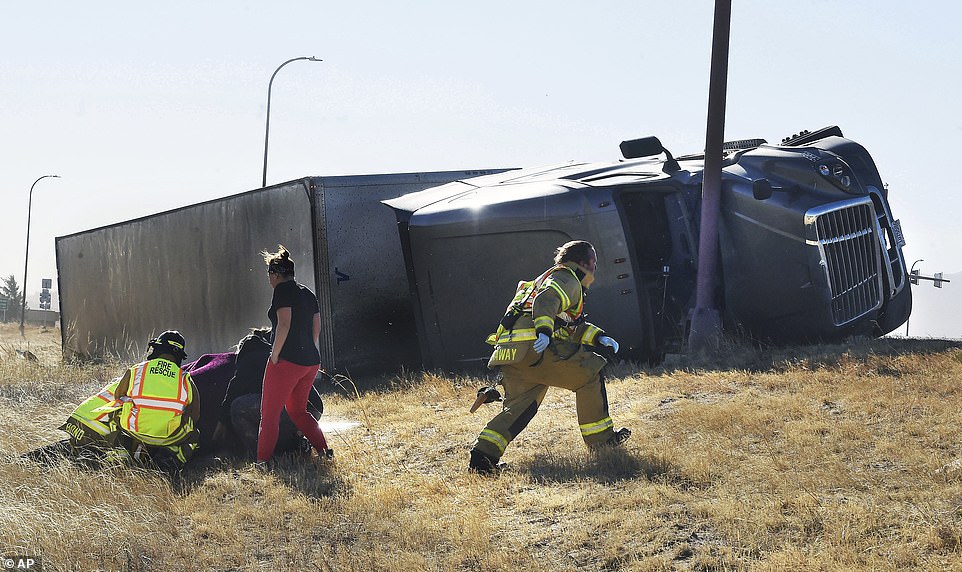 COLORADO: The winds were so powerful that they knocked over tractor trailers, like this one in Colorado Springs. Paramedics are seen here tending to an injured person on the onramp of I-25 north

Mayor Kirk Crespen, of Lamar, Colorado, said crews have been out all day to try to clean up the damage caused by the winds as well as fix the broken telephone poles.

Mike Smaldino, a public information officer with the Colorado Springs Fire Department also said sustained winds of up to 100 miles per hour caused significant damage in the city.

‘Our own fire department roof has partly blown off,’ he told CNN, noting: ‘Just on my drive into the city, I saw about a dozen semitrucks toppled over.’

He also said that calls into the fire department had nearly quadrupled after 5pm, saying: ‘We are dealing with gas leaks, grass fires from powerlines being down as well as smoldering trees.’

At Fort Carson, a US Army base in the state, winds caused major damage to one gate, forcing the base to clear it.

A public information officer told CNN they are still assessing the damage at the base, but it appears to be minor and no injuries were reported.

Meanwhile, more than 500 flights were delayed into and out of Denver International Airport, with 146 canceled. The Federal Aviation Administration put in a ground delay until 6pm local time at the airport, according to NBC News.

But at one point, a full rainbow appeared above the dust clouds in the state. 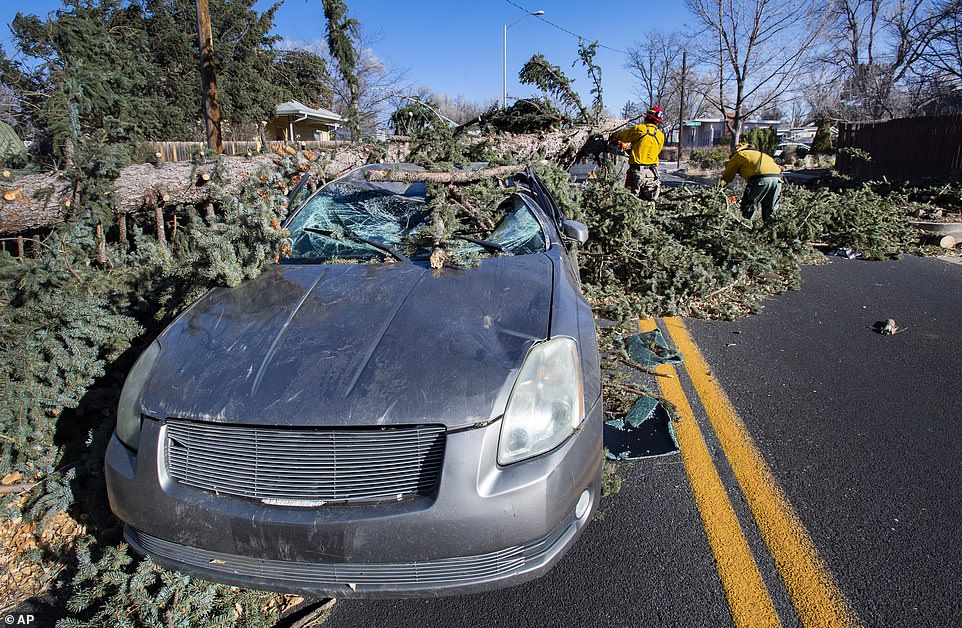 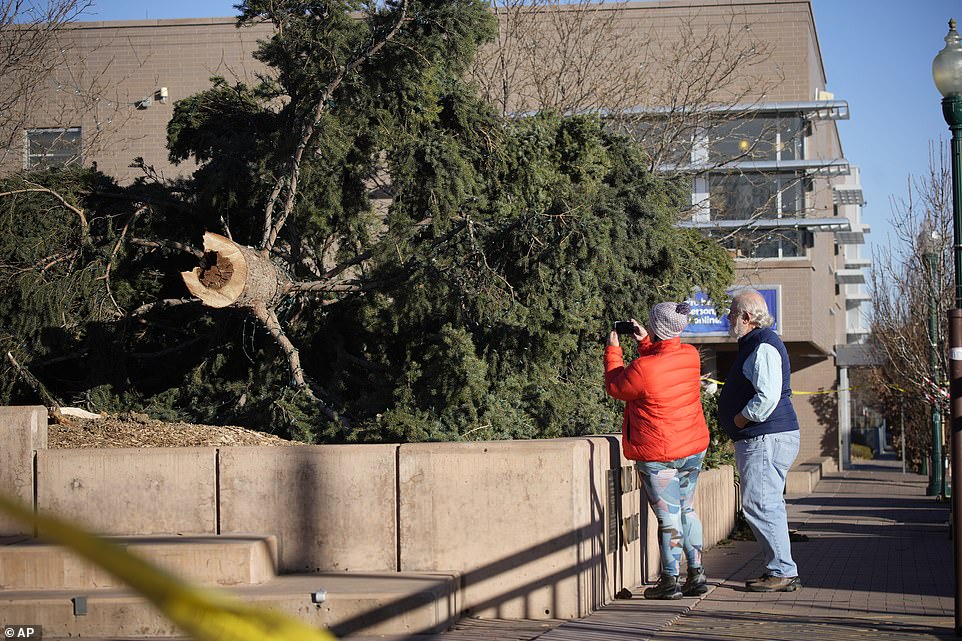 COLORADO: Passers-by took pictures of a tree after it fell in Arvada on Wednesday 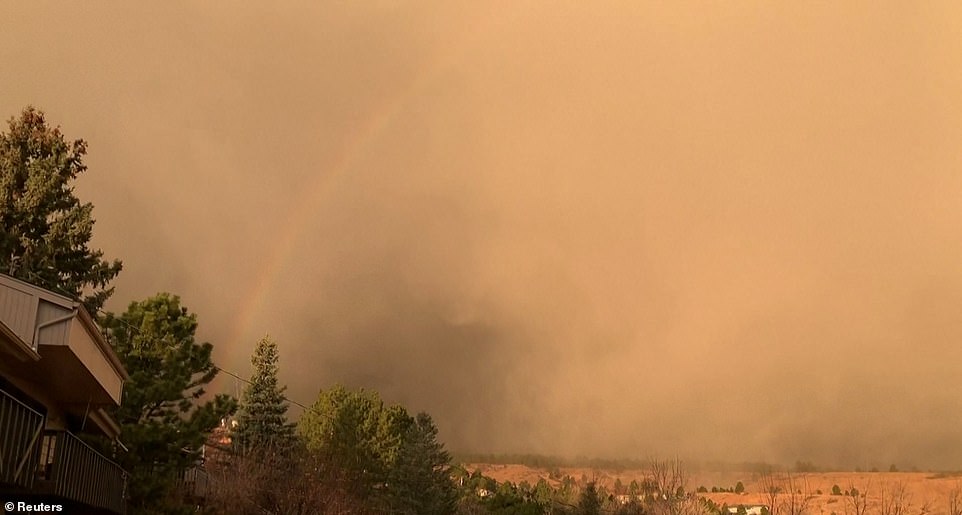 COLORADO: At one point a rainbow formed over the dust clouds in Colorado 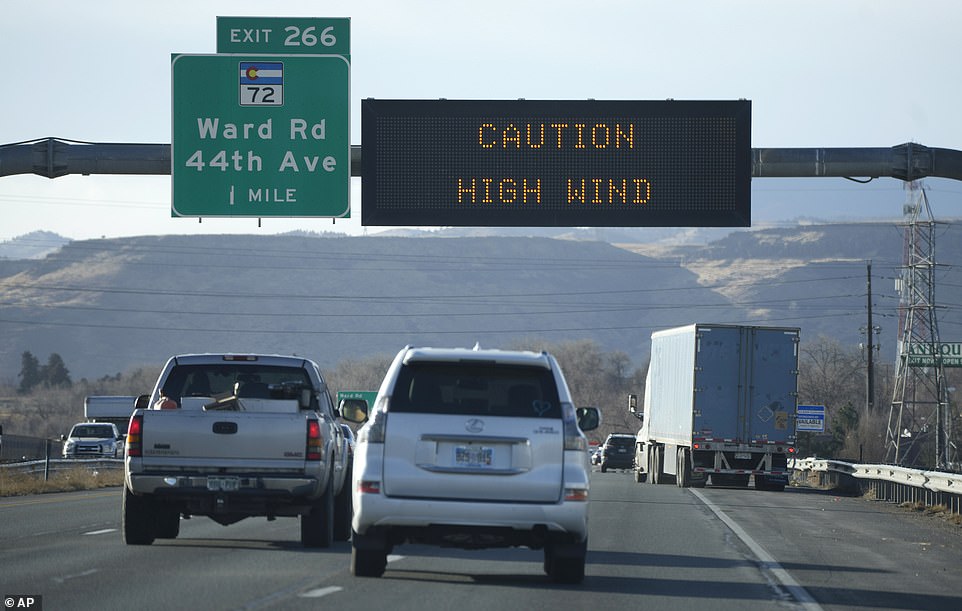 COLORADO: An electronic overhead sign warned motorists heading westbound on I-70 of the dangerous winds

Portions of Oklahoma’s panhandle were evacuated Wednesday afternoon, with all lanes of US Highway 287 closed down due to extreme winds, as fire crews battled massive wildfires in the region.

The large fires spread heavy smoke and caused poor visibility, forcing officials to shut down US 412 and US 64 near Guymon in both directions, with officials asking residents in the area to evacuate.

The order was rescinded just a few hours later, with Comanche County Management saying the fire is under control. They still urged people to avoid the area, as five volunteer fire department crews remained on the scene.

And in Mooreland, fires were egged on by high winds and hay bales, KOCO reports.

‘I just got a call from a friend,’ resident Debbie Hargis said. ‘I was down doing taxes and she said “Are you watching? There’s a fire across from your house.”

‘So I came out and I started watering,’ Hargis told KOCO, noting: ‘I’ve been meaning to put a sprinkler system in for years. It’s going in this year.’

She was soon aided by other neighbors trying to help quell the fire.

‘This is a small community,’ she said. ‘Everybody helps everybody.

‘My neighbors down the street were just trying to help me get my hoses hooked up. So neglecting his own yard, helping me.’

Though the winds were starting to die down Wednesday night, the Mooreland Fire Department remained on the scene, watching for any embers that could land in neighbors’ yards.

As of just 10am on Wednesday, there were at least 10 homes ‘severely damaged,’ according to Taos County Information Officer Anissa Arrambide, though she noted to the Albuquerque Journal: ‘There could be more, we are still getting in details.’

The high winds from the storm forced Taos High School to close on Wednesday morning, as at least a dozen power poles were taken down throughout the area.

In Santa Fe, several small planes were overturned and parked vehicles were damaged at the Santa Fe Regional Airport and large trees were blown down.

Elsewhere, the entire town of Los Alamos, representing 6,000 households, or about 12,000 residents, throughout the morning and early afternoon.

And in Gallup, residents reported near white-out conditions on Wednesday morning, according to KOAT. 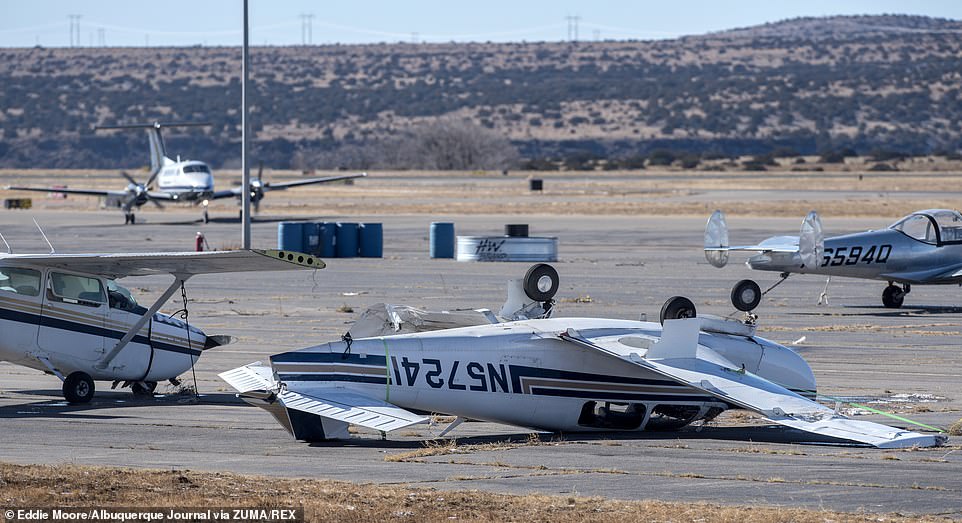 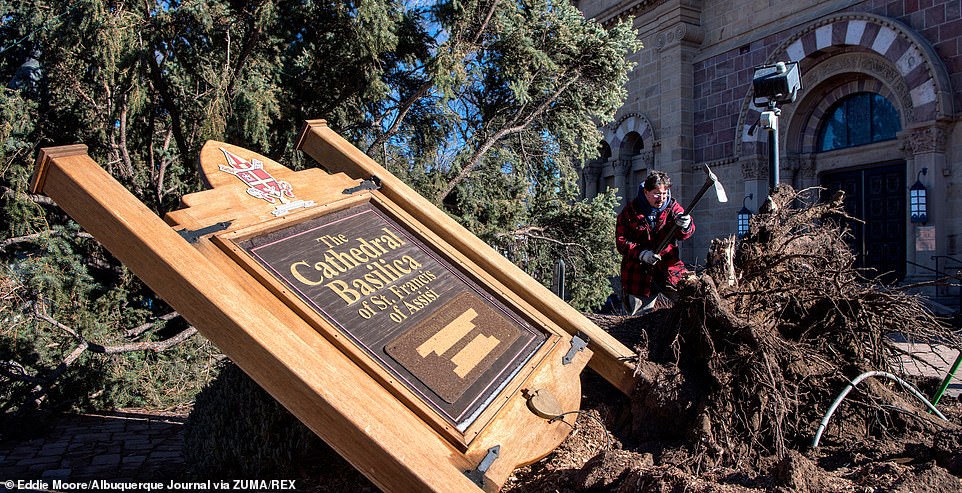 NEW MEXICO: Matthew Encinias, with Seeds of Wisdom, worked to remove a spruce tree that blew over to the Cathedral Basilica of St. Francis of Assissi during a storm in Santa Fe