Boris Johnson and his wife Carrie have today revealed the name and first picture of their new born baby.

The baby, the couple’s second together, and the Prime Minister’s seventh child, will be called Romy Iris Charlotte Johnson.

The name Romy is after Carrie’s aunt, Rosemary, while Iris is from Greek word for rainbow – a nod to the fact she is a ‘rainbow baby’  – a child born after miscarriage or stillbirth.

Her second middle name is a tribute to the Prime Minister’s mother Charlotte Johnson Wahl, who passed away earlier this year.

Carrie and Boris have followed the same trend as Prince Harry and Meghan Markle, calling the child a nickname rather than a full name.  Lilibet Diana Mountbatten-Windsor,  the royal couple’s second child, who was born in June, is named after the Queen’s family nickname – rather than her full name, Elizabeth.

The picture of baby Romy, in a cot beside a Christmas tree with their eldest Wilf looking over, was posted on Carrie’s Instagram page earlier today. The image shows the baby’s full face, the couple have only shared pictures of Wilf from behind.

She said in the post: ‘Welcome to the world darling Romy. Born on December 9 at 9.02am.

‘Romy Iris Charlotte Johnson. Romy after my aunt, Rosemary. Iris from the Greek, meaning rainbow. Charlotte after Boris’ late mum who we miss so much.’

She added: ‘Wilf has been stroking Romy’s hair, giving big kisses and playing with his matchbox cars right next to her crib, just in case she feels like joining too.’ 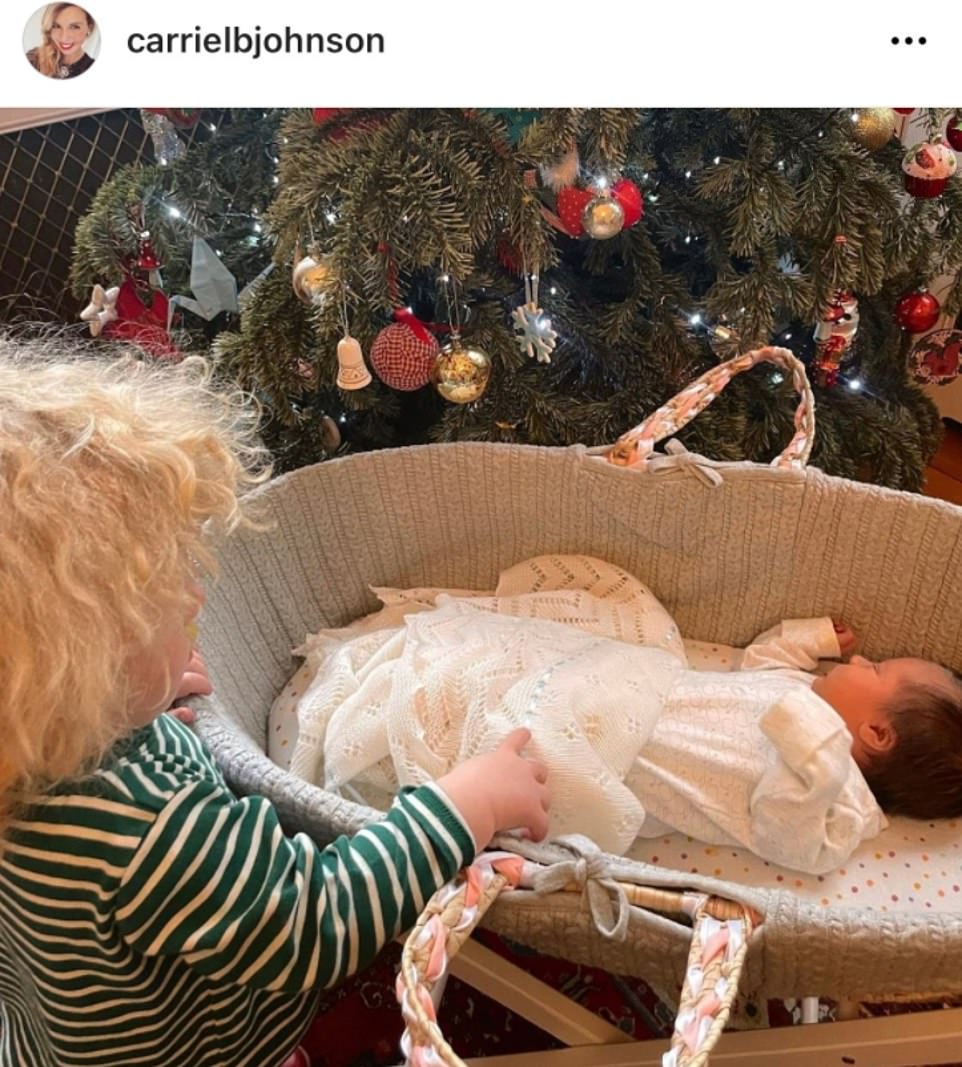 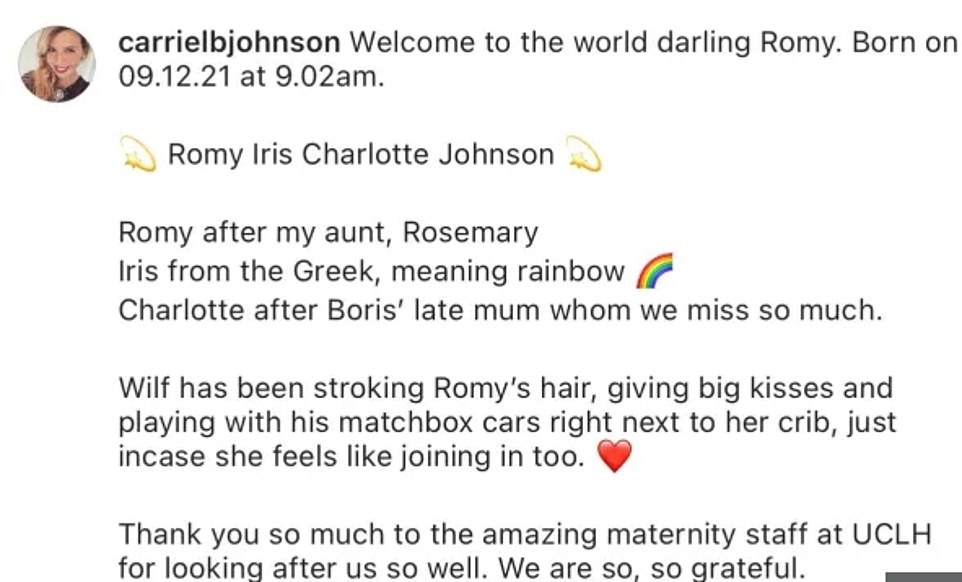 The picture of baby Romy, in a cot beside a Christmas tree with their eldest Wilf looking over, was posted on Carrie’s Instagram page earlier today. The image shows the baby’s full face, the couple have only shared pictures of Wilf from behind.

Carrie also paid tribute to NHS staff who helped deliver Romy, describing the maternity unit at University College Hospital as ‘amazing’, adding: ‘We are so, so grateful’.

It comes as the Prime Minister revealed the name Romy to NHS staff during a vaccination centre tour earlier today.

Speaking in Kent, the Prime Minister was asked if he and Carrie had chosen a name for their little girl.

He replied: ‘She’s going to be called Romy’.

Mr and Mrs Johnson announced the birth of a ‘healthy baby girl’ at a London hospital on 9th December.

The Prime Minister said to have been present during the birth.

The pair and their new born baby daughter returned to Downing Street earlier this week following the birth.

A spokeswoman for the couple said: ‘Both mother and daughter are doing very well.

‘The couple would like to thank the brilliant NHS maternity team for all their care and support.’

The name itself is a girl’s name of German origin.

German-French actress actress Romy Schneider, who was prominent in the 1950s, is perhaps the most famous person to have been called Romy.

According to Carrie, Iris is from the Greek word Rainbow.

Charlotte is a nod to Boris Johnson’s mother Charlotte Johnson Wahl, who died in September.

She was a professional portrait painter who painted the likes of Joanna Lumley and Jilly Cooper.

The couple announced they were expecting their second child together at the end of July, as the 33-year-old environmental campaigner spoke of having a miscarriage earlier in the year.

The birth came after the Prime Minister announced he would be plunging England into so-called ‘Plan B’ restrictions – including vaccine passes, compulsory facemasks and orders to work from home – in a bid to combat the spread of the Omicron variant.

As well as facing Tory anger over the latest curbs, Mr Johnson is also under fire over a series of scandals including alleged rule-breaking Christmas parties in Number 10 last year.

Downing Street said Mr Johnson intended to spend some time with his family in the coming days although he is unlikely to take an extended period of paternity leave.

Labour leader Sir Keir Starmer sent his congratulations to the couple on the arrival of their baby saying: ‘Wishing your family health and happiness.’

It comes as Boris Johnson today denied imposing a ‘lockdown by stealth’ as Professor Chris Whitty faced a Tory backlash after telling the nation to restrict socialising in the run up to Christmas.

The Prime Minister said this morning that ‘we have got to be very cautious’ due to the spread of the Omicron variant but he insisted ‘we don’t want to make your choices for you about your social life, we are not closing things’. 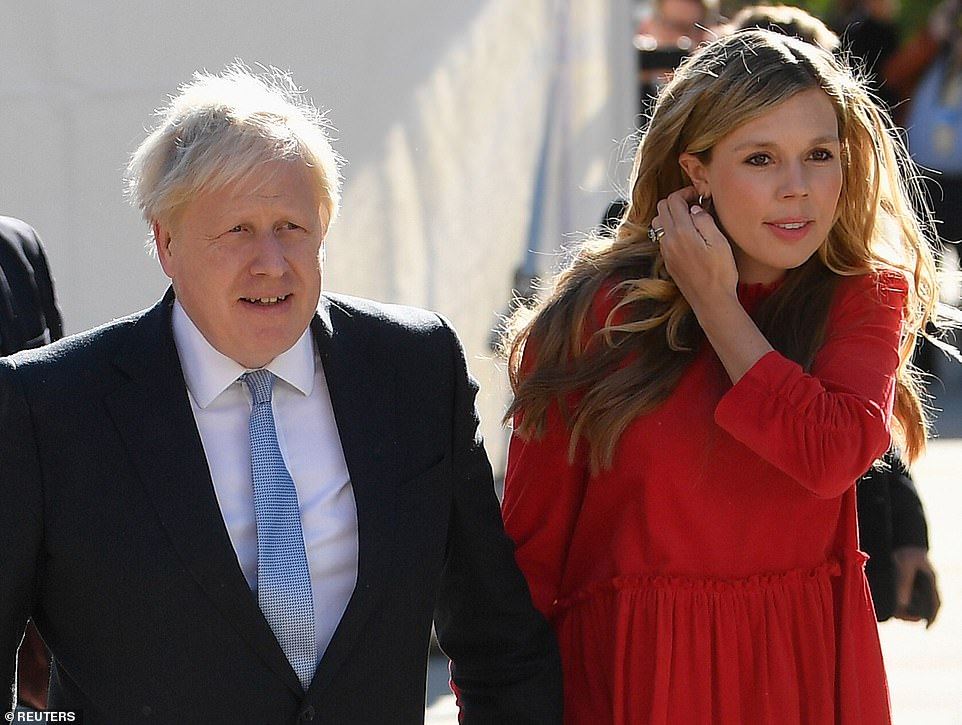 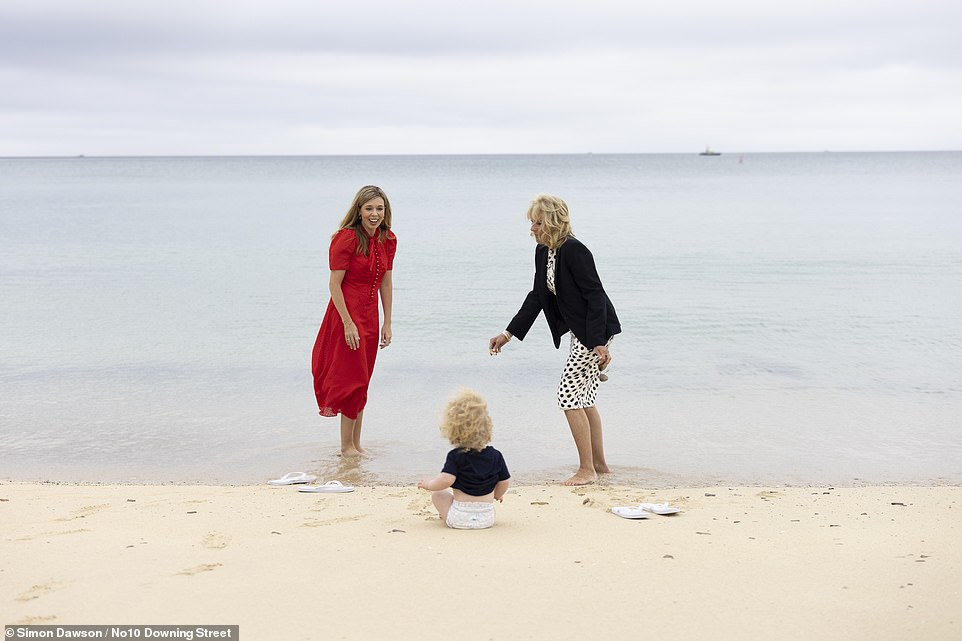 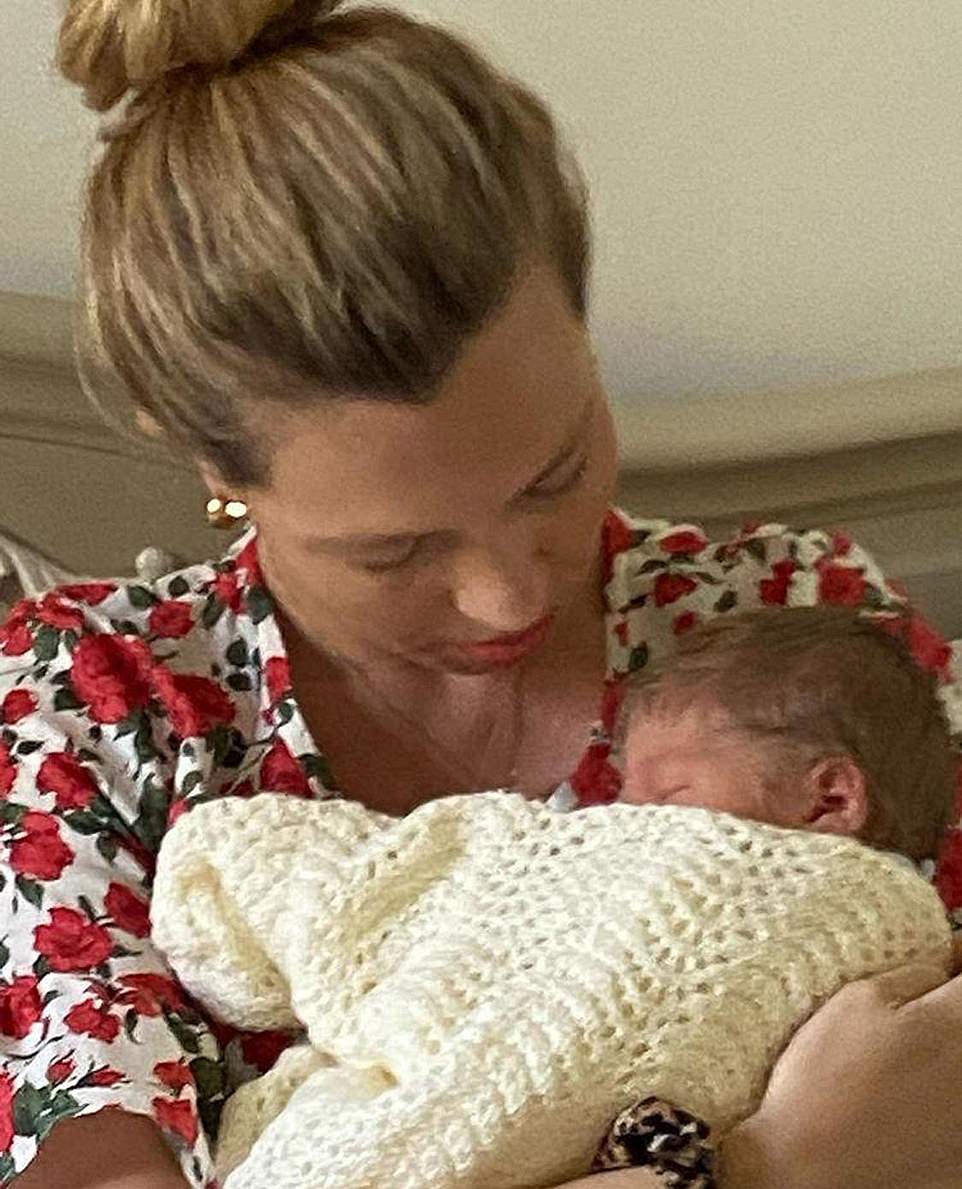 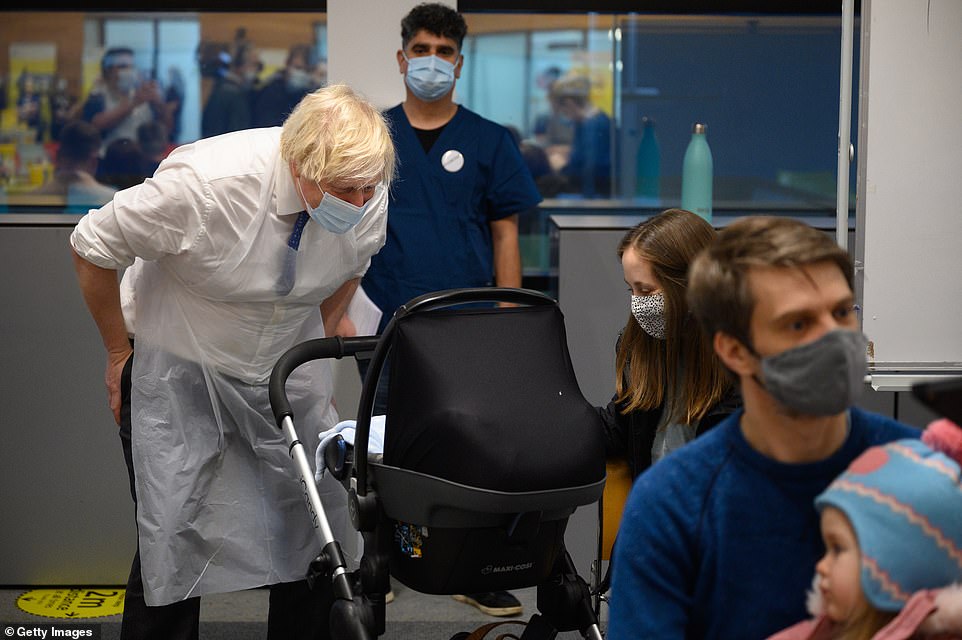 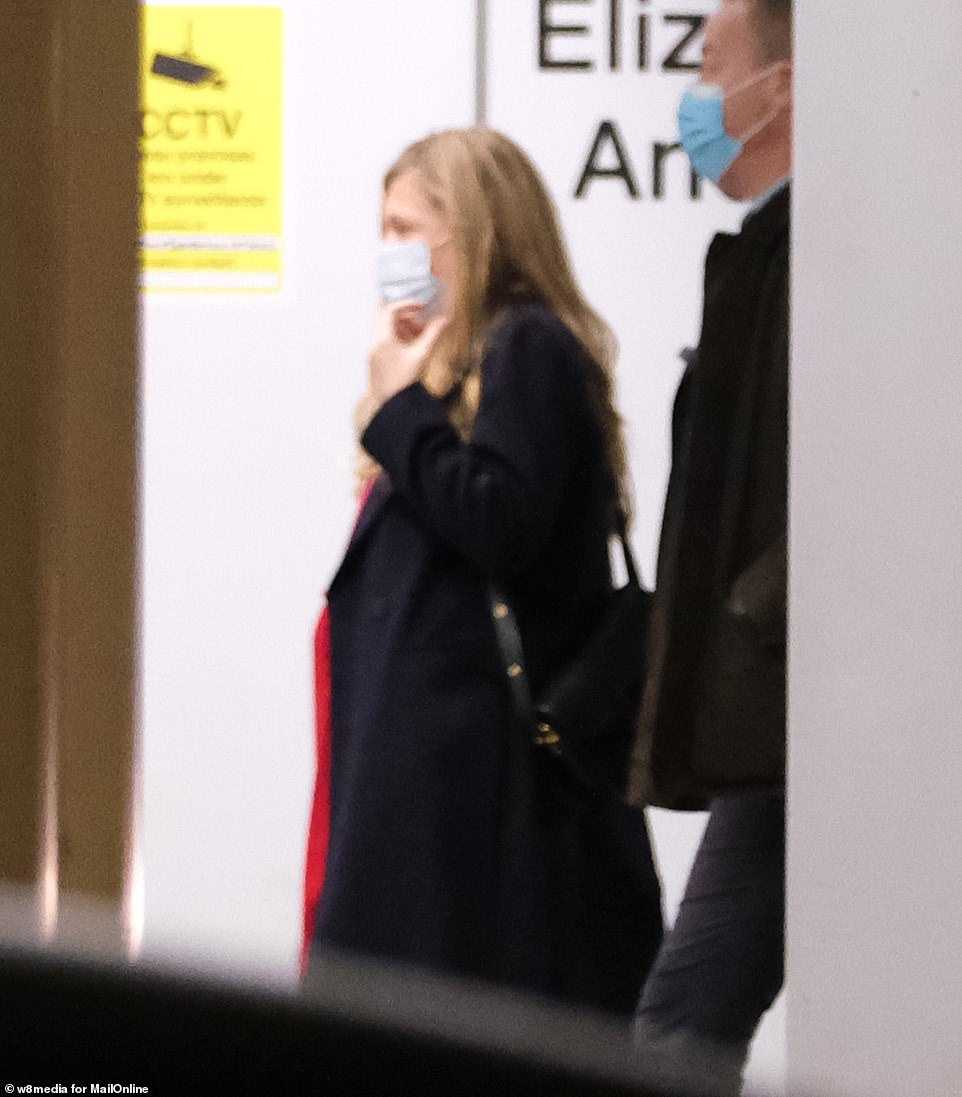 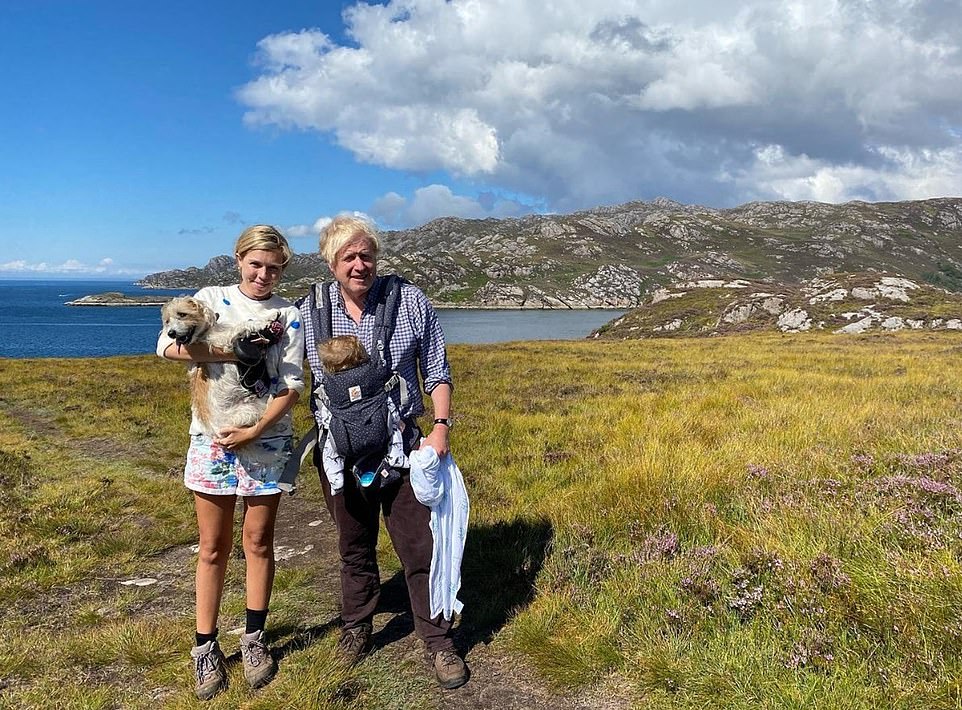 A spokeswoman for the couple said: ‘Both mother and daughter are doing very well. The couple would like to thank the brilliant NHS maternity team for all their care and support’. Pictured on holiday in Scotland last year

Conservative MP Joy Morrissey tweeted: ‘Perhaps the unelected covid public health spokesperson should defer to what our ELECTED Members of Parliament and the Prime Minister have decided. I know it’s difficult to remember but that’s how democracy works. This is not a public health socialist state.’

Who are Boris Johnson’s seven children?

She is the daughter of barrister Marina Wheeler. She is a writer, editor and broadcaster.

Boris’s second child with Ms Wheeler. He is 26 and was educated at the £27,174 a year Westminster School.

He previously had an internship at men’s magazine Esquire Middle East, based in Dubai.

The Prime Minister’s third child with Ms Wheeler. She is 24 and studied at the £18,000 per year Highgate School in North London.

She is a writer and was the student editor of her school’s alumni magazine Cholmeleian.

The youngest of Johnson’s children with ex-wife Ms Wheeler.

He attended Cambridge University – whereas his dad went to their rival Oxford.

It was reported last year that he wrote a play about Brexit.

Stephanie is the third youngest of Johnson’s children and was born in 2009.

Her mother is Helen Macintyre, with whom Mr Johnson is accused of having an affair.

However, his relations were revealed after a 2013 court battle in which he sought an injunction to prevent her existence being reported.

His youngest with partner Carrie Johnson, whom he engaged in late 2019.

In the same year Ms Symonds announced she was expecting baby Wilf, who was born on 29 April 2020 at University College London.

His youngest child and his second with Ms Symonds.

She was born at University College London on December 9 and is named after Ms Symond’s aunt Rosemary.

Her middle name Charlotte is a tribute to Boris Johnson’s mother Charlotte Johnson Wahl, who died in September.

Ms Morrissey, who is a Government parliamentary private secretary, the lowest rung on the ministerial ladder, subsequently deleted the tweet as she faced a wave of criticism.

Prof Whitty said this morning that he did not want to dictate what people can and cannot do, but told MPs: ‘This is about saying to people, look, this is a period to prioritise. And also to be clear, (this) was a message the Prime Minister also said last night.’

Prof Whitty made the comment to the Health and Social Care Select Committee as he also warned pandemic disruption is likely to continue for another 18 months until vaccines and antiviral drugs are capable of doing ‘almost all of the heavy lifting’ when it comes to tackling Covid variants.

He also said he believes the Omicron peak of infections could fall faster than in previous waves. He said the ‘upswing’ for Omicron will be ‘incredibly fast’ and the peak will therefore be ‘really quite fast’ before infections ‘may then come down faster than previous peaks’.

Millions of Britons are now expected to be adjusting their festive plans in an attempt to ensure they can see their family on Christmas Day.

Mr Johnson last night stopped short of telling people to cancel their plans but called for caution while Prof Whitty went further as he said people should restrict socialising.

The comments triggered a ‘tsunami of cancellations’ for pubs and restaurants as many people are now voluntarily staying at home in a bid to avoid catching coronavirus. Anyone who tests positive from yesterday will have to isolate for 10 days, forcing them to miss festivities.

The hospitality industry has accused Mr Johnson of imposing a ‘lockdown by stealth’ and is demanding the Government urgently bring forward fresh financial support to help the sector survive.

Health Minister Gillian Keegan today said the Government is ‘not intending to make any more restrictions’ between now and Christmas Day.

But she said Mr Johnson ‘won’t hesitate’ to recall Parliament over the festive period if he believes he does need to bring in extra curbs amid growing fears that a Plan C could be rolled out immediately after Christmas.

MPs voted in favour of Mr Johnson’s Plan B measures of compulsory face masks and Covid passes for nightclubs and large venues on Tuesday evening but the PM suffered a huge Tory rebellion.