Skip your way to to better immunity and stronger bones!

When was the last time you used a skipping rope? Chances are it was years ago in the playground — but it might be time to pick it up again.

Research shows that skipping can boost your heart rate (which improves cardiovascular fitness), burn calories almost as effectively as jogging and increase your immunity.

But perhaps more surprisingly, it can also improve bone health. 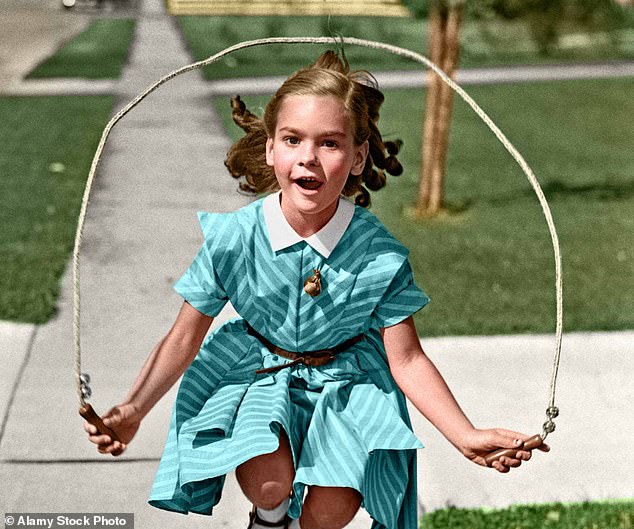 Research shows that skipping can boost your heart rate (which improves cardiovascular fitness), burn calories almost as effectively as jogging and increase your immunity

Such are the benefits for bones that skipping is recommended by charities including the Royal Osteoporosis Society to ward off the effects of the condition (where a lack of bone density makes bones vulnerable to fractures).

Osteoporosis affects 3.5 million Britons and is particularly common in post-menopausal women, who have declining levels of the bone-protective hormone oestrogen.

And skipping is easy to do.

‘It is one of those movements that never leaves us,’ says Leon Wormley, a fitness expert and an adviser to the charity Versus Arthritis. ‘Women who haven’t picked up a skipping rope for years take to it like a duck to water. I have clients in their 70s who are skipping.’

One of the reasons it is so good for osteoporosis is its moderate impact, which strengthens bones.

We tend to lose ankle mobility as we age, raising the risk of tripping over, so practise the movement before you start skipping, says fitness expert Leon Wormley.

‘Practise heel raises first. Stand with feet shoulder-width apart, facing forwards, then roll up on to your toes and hold for a second or two, then drop back down. Rest your hands on the back of a chair for balance.

‘When you feel confident with your ankle flexibility, move on to practising bunny-hop bounces off the ground. Then introduce the rope.

‘One thing everyone gets wrong is trying to jump too high or far forward. But the rope is only a few millimetres thick, so you don’t have to bounce that high.’

Hand positioning is also important: start with your hands next to your hips and make sure the rope is not too long.

If you have a condition such as arthritis or osteoporosis or are prone to falls, seek medical advice first.

‘It’s similar to when we get cold and shiver to warm ourselves up: the body will react to any form of stimulus and adapt to survive,’ he says. ‘With skipping, the body will say: “Muscle mass isn’t going to be enough on its own,” and the bone itself will start to develop.’

This, in turn, can help ward off osteopenia (lessening bone density) and osteoporosis.

This effect has been shown in numerous studies, including a 2010 review where researchers from Sheffield University and Hull University found that skipping and jumping were effective in increasing bone mass density in the upper part of the thigh bone in pre-menopausal women.

This is an area of softer bone, prone to low bone density and vulnerable to fracture because of its position near the joint.

The study also noted that normal daily activity does not stimulate bone formation, reported the Journal of Bone and Mineral Metabolism.

Separately, as a form of aerobic exercise (which means it provides a cardiovascular workout), skipping stimulates the body’s drainage system (the lymph system), moving fluid from the tissues to the bloodstream, and boosts the immune system by improving blood flow and the circulation of immune cells.

Skipping also ‘activates important muscles in the legs, including the quads, the hamstrings and your glutes [bottom muscles]’, says Mr Wormley.

‘When you skip, you’re upsetting that centre of gravity all the time, so your core stabilising muscles have to work hard to balance your body. That’s good for coordination and concentration.’

So which skipping rope is best?

Penny Weston, director of MADE Wellness Centre in Staffordshire, selects five of the best skipping ropes:

Decathlon leather skipping rope (£7.99, decathlon.co.uk): ‘This is a good budget rope made from strong, durable leather, for use on any surface. It’s adjustable in length and has squishy handles for a good grip.’

Vanwalk skipping rope with counter (£13.99, amazon.co.uk): ‘This versatile rope has a digital counter feature that tells you the number of loops you make, as well as a timer and calorie-counter, which will give approximate scores based on jump count and body weight.’

Nike Speed Rope (£19.95, nike.com): ‘A lightweight rope — weighing 180g — that’s a good choice for those who want to focus on improving their speed. Like the other ropes here, it has non-slip handles, which are a must.’

Dope Ropes Signature Beaded Jump Ropes (£19.99, doperopes.co.uk): ‘These funky-looking skipping ropes, which are made with beads, are great for beginners who might struggle with a lighter speed rope. The beads make it more resilient, and add weight and form, making it easier to learn the ropes.’

Bulldog Gear JR2 Bearing Jump Rope (£35, bulldoggear.com): ‘This rope is made from British steel wire. It’s lightweight, with handles that won’t slip, and is designed for people who want to build up to longer, sweatier workouts without losing their grip.’ 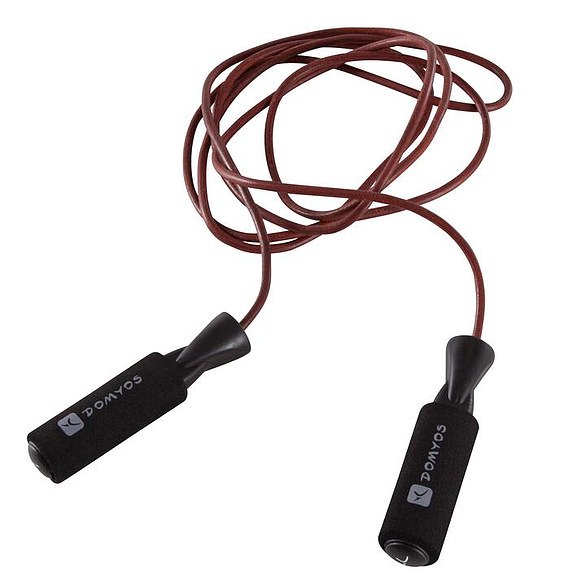 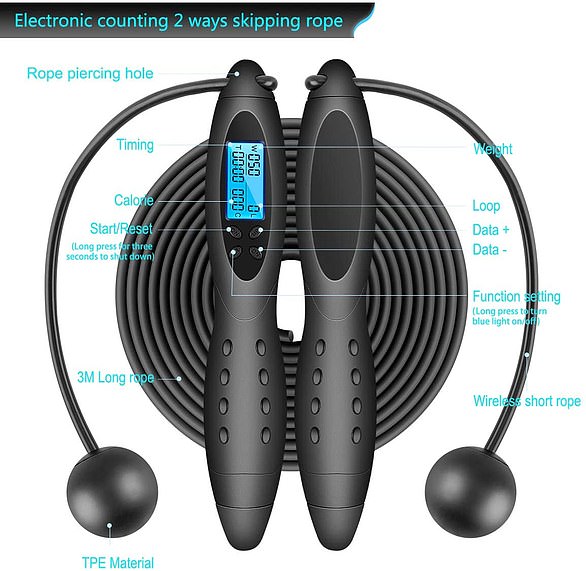 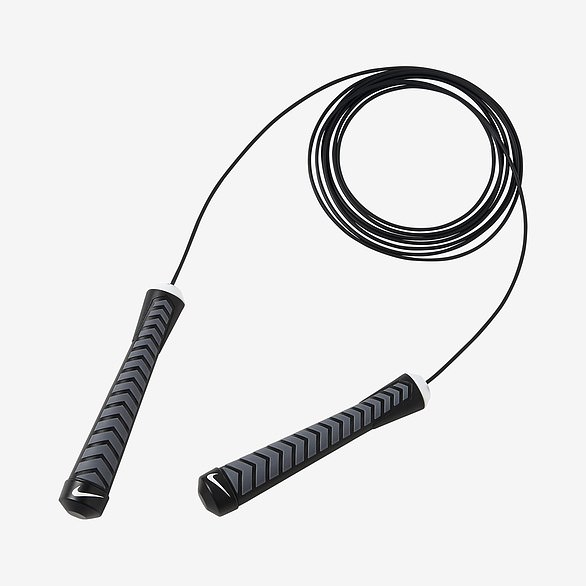 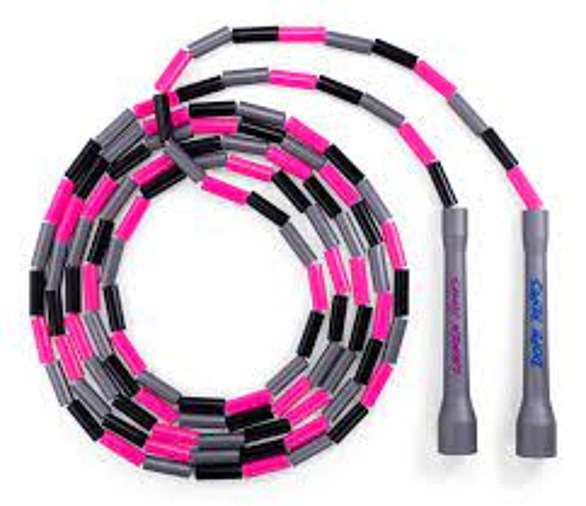 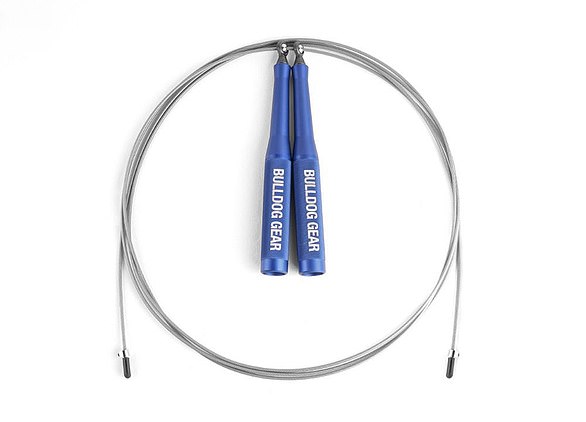 While it’s a calorie-burner, too, just how many it uses up has been hotly debated ever since a 1968 study — published in the journal The American Association for Health, Physical Education and Recreation — included the now oft-quoted claim that ten minutes of skipping is as effective as 30 minutes of jogging for improving fitness.

Although no research has since been able to match these results, it’s generally thought skipping burns roughly the same amount of calories as jogging (around 11.6 to 11.9 calories per minute) in an average-weight person.

‘The advantages of skipping are that it is low-cost, doesn’t need much space or many facilities, and benefits both the general public and sports performance athletes.’

He recommends beginners to start slowly, with 30 seconds of skipping, then build up to five repetitions of 30 seconds, two or three times a week.

‘If you’re not used to skipping, the body responds well to impact exercises, and bone density will improve,’ he says. ‘But you need to keep progressing the load.’

Arj Thiruchelvam agrees, adding: ‘Anyone who has taken up skipping will know it’s hard to coordinate the movement, so it tends to be short bouts of exercise.’

He suggests you gradually extend the duration until you can manage a 20-minute session, including a warm-up and cool-down, in which you alternate bouts of intense exercise with short rests in the middle.

Once you’ve established a base level of skipping fitness, you could add variety with one-leg skipping, or trying ‘double-unders’, where you whip the rope around twice while your feet are in the air.

When it comes to buying a rope, these have evolved from the woven playground staple (see box).

And in terms of where to skip, choose an area that’s free of obstacles and has a firm surface with a small amount of give, such as wood or a jump-rope mat (these cost from around £45 and are usually made from a strong, durable vinyl to protect you and your rope). Grass can be too soft and wet, particularly in winter.

As skipping is a medium-impact exercise that requires a lot of co-ordination, anyone with a health condition such as arthritis or osteoporosis or who is prone to falls should first seek medical advice.

Although osteoporosis can cause bones to fracture easily, doctors now generally encourage those with the condition, or other musculoskeletal problems, such as arthritis, to engage in moderate exercise.

The Royal Osteoporosis Society advises around 50 ‘moderate’ impacts — that is, jumping, skipping, jogging or hopping — to most patients for bone- building (although not those with spinal fractures).

The idea of doing this kind of impact workout when you have joint pain might seem counter-intuitive, but as Mr Wormley explains: ‘People’s natural response to pain is to stop exercising. But with arthritis, if you stop moving that joint the pain will get worse.

‘If the joint has deteriorated you won’t get it back to the condition it used to be, but maintenance and exercise will keep it mobile by building up the supporting muscle, keeping you independent with a good quality of life.’

Mr Thiruchelvam agrees: ‘GPs used to advise anyone with a knee injury to avoid high-impact exercise, but there’s now a wealth of clinical evidence that says the opposite.

‘We need opportunities to stimulate repair in that area, therefore, high-impact exercise is good, but in small measures. Skipping is a great way to do this.’

If your kids love eating nuggets, you don’t need...