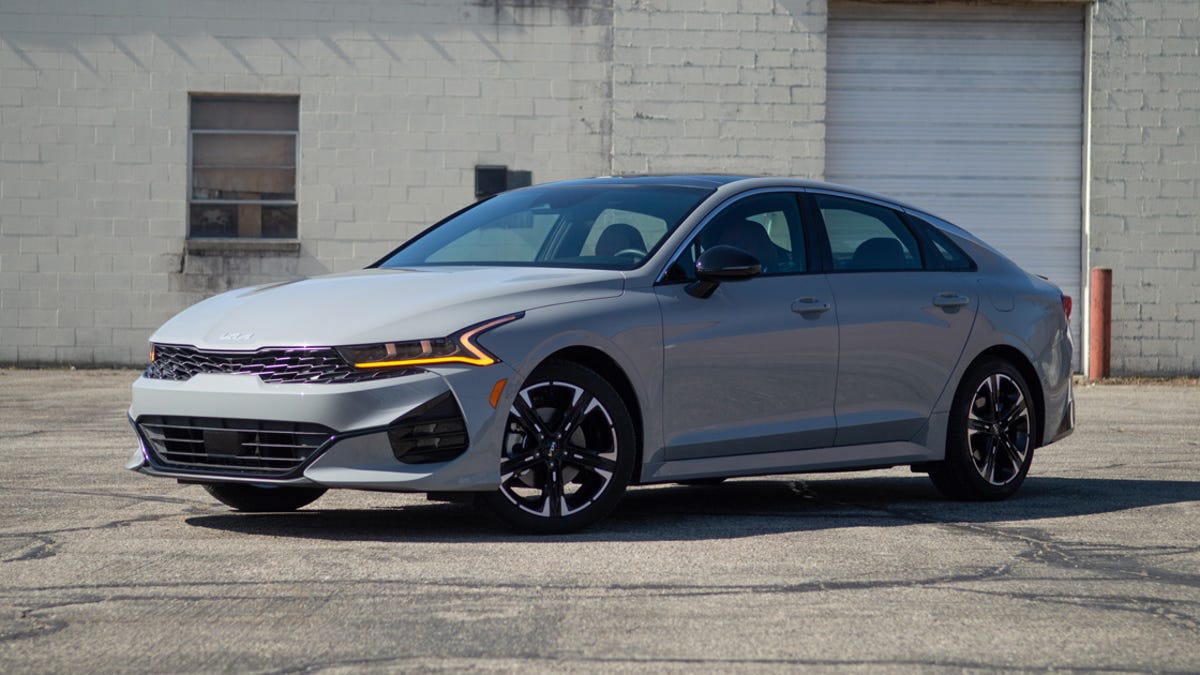 The GT-Line, as the name suggests, is not the full-fat GT that puts down front-tire-shredding amounts of horsepower. Instead, it’s all about keeping up appearances, and in that vein, I’m a fan. This K5 wears the same aggressive bumpers, wheels, grille and spoiler as the GT, and combined with the $445 Wolf Grey paint job, it’s a looker. The tapered rear silhouette is attractive and Kia’s new logo blends in effortlessly.

Inside, I’m left wondering how the K5 GT-Line is able to keep its base price so low. The sedan’s new red “leather” option feels pretty dang expensive for a no-cost choice, and since it’s completely vegan, it won’t weigh on your conscience. Sure, there are a few instances of hard plastics, but they’re mostly on the lower panels, where my hands don’t often stray. The cabin’s layout is straightforward, with a healthy amount of physical buttons and switches that are easy to use with little distraction. The rear seat may not have the sheer legroom of, say, a Honda Accord, but it’s sufficiently roomy back there for my 6-foot frame, although that fastback-style roofline may frustrate taller passengers.

Usability and storage are excellent in the K5 GT-Line. The door pockets are large enough for all manner of receipts and other detritus, while the center console offers a cubby under the climate controls and a medium-size pocket under the armrest, in addition to a standard wireless device charger that relies on a clever drop-in style to avoid unwanted disconnections. The only trouble is that a larger purse will have to go on the passenger seat or floor. Out back, the trunk’s 16-cubic-foot capacity is more than enough, and it’s one of the largest in the segment.

Kia has always been a leader in cabin tech — especially cabin tech that doesn’t cost an arm and a leg — and I’m happy to report that is still the case. For 2022, the K5 GT-Line (and up) now come standard with a 10.3-inch touchscreen running the latest version of Kia’s infotainment system. Cribbed from Genesis and Hyundai, this telematics getup offers some very pretty graphics and functions that are easy to get used to, whether it’s inputting a destination or changing the screen brightness. Apple CarPlay and Android Auto are included, although they’re a wired-only affair. And speaking of charging, while I appreciate that there are two USB-A ports in each row, most of the automotive world has upgraded to the speedier Type-C, which would be nice to see here.

The gauge cluster is precisely that: a cluster of physical gauges, which is a little old-school given the industry’s current predilection for shoehorning 12-inch screens in front of the wheel. But the four physical dials are easy to read at a glance, and the small TFT display between the speedometer and tachometer is still capable of giving me all the information I need while driving.

Every Kia K5 comes standard with forward-collision warning, automatic emergency braking, pedestrian detection, lane-keeping assist, automatic high beams and a rear-seat reminder. The GT-Line beefs up that suite by adding blind-spot monitoring, and the $1,900 Premium Package bolsters it further with adaptive cruise control and Highway Driving Assist, a hands-on system that combines ACC and lane-keep to hold the car in its lane on the highway while pacing the flow of traffic. The lane-keep assist can be a little heavy-handed in normal operation, though. Also, if you live near a construction zone that moves your lane to the opposite side of a divided highway, prepare to have the car yell at you about driving on the wrong side of the road every 30 seconds.

While the Kia K5 GT offers a stonkin’ 290 horsepower routed through the front wheels, the GT-Line model keeps things more sedate. Its 1.6-liter turbocharged inline-four gas engine doesn’t make the best sounds at higher revs, but its 180-hp, 195-pound-foot output is more than enough motive force for 99% of situations. This engine is plenty happy to play, but it’s also equally at home when you’re just cruisin’, its eight-speed automatic transmission smoothly swapping gears in the background. The pedals offer the right level of sensitivity to keep heads from bobbing about.

Under the body, the GT-Line’s suspension is the same as every other non-GT trim. All K5s are tuned on the slightly sporty side, so the ride is sufficiently engaging without being an annoyance, especially on lower trims with smaller alloys and chunkier tire sidewalls. Things are slightly different on the GT-Line, which picks up larger 18-inch wheels and relies on thinner 235/45R18 Pirelli P-Zero all-season rubber. That said, the body still does a commendable job soaking up all but the sharpest blows to the suspension, where some unwanted noise will undoubtedly make its way inside. But if you want a sedan that’s a little more engaging than whatever you can pluck off the lot from Toyota, the K5 is probably one of the best ways to go. It’s still plenty fun to throw into corners, thanks to decently sharp steering and just the right amount of body roll.

The inclusion of all-wheel drive on the GT-Line for the 2022 model year shouldn’t have much of an impact on fuel economy. The AWD GT-Line offers an EPA-estimated 25 mpg city, 33 mpg highway and 28 mpg combined. That’s only a few ticks off the FWD model’s 37-mpg highway estimation, and a light foot can help close that gap further. My combined economy over a couple hundred miles rings in at 29 mpg.

Despite the average new-car transaction price slowly resembling what your parents paid for an entire house back in nineteen-dickety-two, the 2022 Kia K5 keeps things impressively affordable. The GT-Line AWD starts at $28,685 (including a $995 destination charge), and my tester doesn’t change that very much, adding just four options: $445 for Wolf Grey paint, $95 for a cargo mat, $155 for carpeted floor mats and $1,900 for the Premium Package that adds a panoramic roof, LED headlights, more driver aids and a heated steering wheel. All in, I’m staring down a $31,280 window sticker. Nobody tell Kia that this car feels little… undervalued.

Midsize sedans have been family staples for decades, and that means that the K5 is smack-dab in a segment filled with some long-established stalwarts. The Honda Accord and Toyota Camry are perennially excellent, albeit a little vanilla compared with the more aggressive styling and driving characteristics of the Kia. The Hyundai Sonata is the K5’s kissin’ cousin, and it offers much of the same technology in a differently styled shell. The Subaru Legacy offers standard all-wheel drive, which can be a perk depending on where you live, but the interior’s a little bleh.

On its own or part of a competitive set, the 2022 Kia K5 is a great midsize sedan. It’s fun to drive, it’s aggressively priced and its styling is some of the best in the segment. Throw in a whole lot of safety and infotainment tech, and the K5 is quite the hard act to top.