NHS call handlers thought an 11-year-old girl who died after ‘her lungs were filled by rat poison fumes’ was suffering from food poisoning so didn’t send an ambulance, a family member has claimed.

Fatiha Sabrin died following a ‘chemical incident’ at her home in Shadwell, east London, on Saturday, December 11 – the day after her birthday.

Nishat Tasnim Disha, Fatiha’s mother’s cousin, who is based in Seattle, Washington, said a 111 call handler thought the family, who were suffering from severe vomiting and diarrhea, had food poisoning.

It was only when a second call was made when Fatiha’s mother was barely responsive that an ambulance was sent.

The schoolgirl was rushed to hospital along with her mother and brother, but she tragically died a short time later.

Ms Disha, who calls herself the children’s aunt, told MyLondon: ‘On Saturday morning, my nephew and niece both started vomiting severely along with diarrhoea. My cousin [Fatiha’s mother] called the paramedics for help, but they couldn’t figure out the reason for vomiting.’ 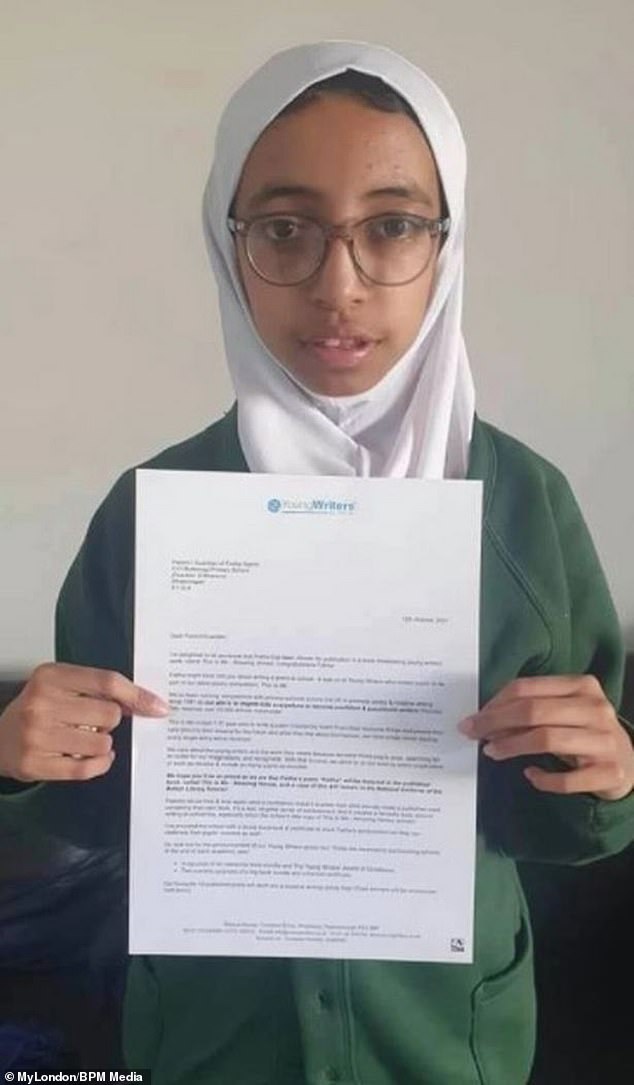 Fatiha Sabrin (pictured) died following a ‘chemical incident’ at her home in Shadwell, east London, on Saturday, December 11, the day after her birthday. Fatiha received awards for her writing, pictured

Ms Disha claims the 111 staff initially thought the family were suffering from food poisoning, and as such the issue wasn’t treated as an emergency.

However as the day went on, Fatiha’s mother started to fall ill too and the conditions of her two children worsened.

‘As the day passed, my cousin started to feel sick as well. After a while, she couldn’t even open her eyes. She was unable to help her daughter and son,’ Ms Disha said.

Ms Disha said when the paramedics arrived Fatiha didn’t have a pulse.

‘CPR and electric shock were given to bring back her pulse but nothing changed. She was brought to the hospital but couldn’t be saved.

‘After check-ups, the doctors found out that their lungs and stomach were filled with toxic gas.’ 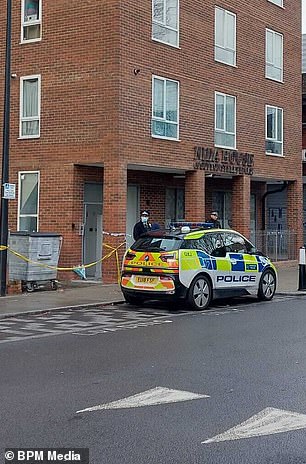 The schoolgirl was rushed to hospital. Pictured, police at the scene

Ms Disha said Fatiha’s father was away from London on a trip during the incident.

Fatiha’s mother is now ‘better’, althought is still in hospital, whilst Fatiha’s brother ‘recovered quickly’ and is staying with family.

‘I can’t describe what the parents are going through,’ Ms Disha said. ‘Fatiha was such a brilliant and happy child, exceptionally kind and always curious to learn.

‘I don’t have words to say for such a tragic loss.’

Ms Disha described the ‘unbearable pain’ the family is currently going through, and added: ‘There must be a proper investigation. We want to know how those toxic chemicals came into that building.’

Sabbir Ahmad, a family friend, said the girl’s father Sahidul Islam has been stuck in an airport since the tragedy happened because he was in Bangladesh on a business trip.

Describing Fatiha, Mr Ahmad said: ‘She was a very bright girl. She was in my home eight or nine days ago and were discussing her future plans.

‘She was very responsive and told me she wanted to be a doctor, and wanted to make something very good of her life. She was also a great writer; she received awards for her writing skills.’ 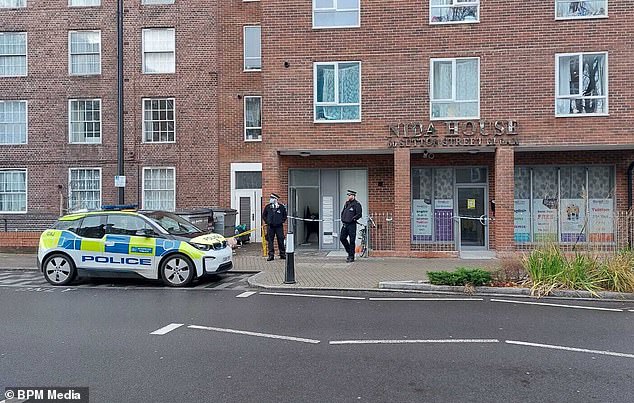 Fatiha’s aunt Nishat Tasnim Disha, based in Seattle, Washington, has been in close contact with Fatiha’s parents since the tragic event. Pictured, police cordoned off the block of flats

Mr Ahmad said his wife, who arrived at the flat and found the family in trouble, alerted the authorities and called an ambulance.

On Sunday local sources claimed the tragedy could have been caused by a powerful rat poison, according to The Sun.

At present it is still unclear where the substance that led to Fatiha’s death was found, though Ms Disha believes the toxic chemicals ‘contaminated the air of the whole apartment block’.

Other residents said they also experienced strange symptoms around the time Fatiha died.

Toni Santos Babi, a resident in the block, said: ‘I and my flatmates smelled a strange smell in our flat, and I had a headache, and they had a cough and throat ache for the last two days.’

At present, Fatiha’s death is being treated as unexplained and the Met said a special post-mortem examination will be scheduled in due course.

A sweep of the building was carried out by the London Fire Brigade and a quantity of chemicals – believed to be used for pest control – were discovered. Work is underway to remove the chemicals from the property, police said.

Detective Chief Superintendent Marcus Barnett, in charge of policing for Tower Hamlets and Hackney, said: ‘Our thoughts remain first and foremost with Fatiha and her family. This is a tragic incident and we are doing everything we can to support them at this time and to understand what has happened.

‘All other residents in the building were evacuated as a precaution and we understand that it is very distressing for them to be away from their homes. We are working closely with the local authority to ensure residents’ needs are being met and to provide timely updates as to when they may be allowed back into their properties.’

Meanwhile, Fatiha’s friends have been left ‘devastated’ by her death and leave an empty chair in the classroom as they grieve, the schoolgirl’s teacher said.

Rena Begum, headteacher at Buttercup Primary in Shadwell, east London, where Fatiha was a pupil, said her classmates were ‘struggling to cope’ with Fatiha’s death and were ‘devastated by her empty seat’ left in the classroom.

She told The Guardian: ‘The children are struggling to cope. It is a real shock to them at their young age that suddenly someone is not there.’

Describing the schoolgirl as ‘role model’ who had ‘strong dreams of wanting to help the community and becoming a medical professional’, Ms Begum went on to say the primary school was now offering bereavement counselling for students.

The headteacher added: ‘Her friends are devastated by her empty seat in class.

‘There was a lot of confusion and tears, it was important for them to just let it out. We are giving them bereavement counselling.’

We all know that being a bigger person...